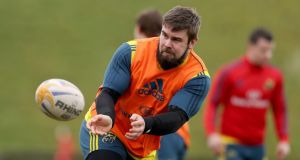 Duncan Casey during a Munster squad training session at University of Limerick this week. Photograph: Inpho


That Duncan Casey has broken into the Munster squad and signed his first professional contract at the age of 23 might suggest he’s been a late developer, but Casey’s progress caps something of a whirlwind few years for which he and Munster owe the club game a significant debt.

Although the Cork-born hooker represented Ireland Schools, this week he revealed he had decided to walk away from the game on leaving school to study economics and Russian in Trinity.

“In the lead-up to my Leaving Cert when I was playing senior cup with Glenstal I decided I wasn’t going to play rugby any more,” he admitted. “I was lucky enough to get into Trinity College and was up there. Having played under-20s during the summer changed my mind a bit and I decided to give it one more year with Lansdowne.

“So, I played for Lansdowne for a couple of months and there was a great coach up there in Declan Fassbender who really took good care of me and I was looking back at Limerick and wondering what could have been, given the fact my interest had perked up again. I was thinking ‘I wouldn’t forgive myself if I didn’t come back down and give it a go’.

“My logic was that if I came down and it didn’t work out, I wouldn’t be in any worse a position than I was at that particular point so I said I’d give it a go.

“Lansdowne agreed a transfer mid-season to Shannon and I was very lucky because things could have been quite messy, and I haven’t looked back since. I’ve had a good couple of years with Shannon, been in the sub-academy, the academy and lucky enough to be involved in the first team now. The grass is always greener and absence makes the heart grow fonder, all of those clichés apply to me, because I only really realised I wanted to give it a go when I was so far detached from it and really started to miss it.”

Development contract
Last season, Casey progressed to a development contract and non-competitive debut away to La Rochelle. “A cameo of about 20 minutes,” is how coach Rob Penney describes it, “and I said this kid has got something. He had some work-ons and he went away and, when he got his opportunity at the start of this year, he has just made every post a winner.”

Casey admits the La Rochelle game was an eye-opener into the intensity and physicality required, and with the help of thrice weekly throwing sessions with skills coach Ian Costello he also improved his darts.

With Mike Sherry injured Casey’s debut came as a replacement at home to Perpignan in the Heineken Cup when his first act was to throw long at an attacking lineout. “It was probably the best thing,” he says looking back. “I got in and just about managed to hit CJ (Stander) at the tail and it was a relief more than anything else. That was probably what I would have been most nervous about, my first lineout throw.”

Casey signed his first two-year professional contract a couple of weeks ago, and Penney says: “It often takes guys time to earn their stripes among the senior guys, but he has got their respect straight away and he’s a great character. He has a great deal of ability and is a powerful young man and I think he’s going to be massive player for Munster and Irish rugby in the future.”

“I was always fascinated by Russia, I’ve a big interest in Soviet era history I suppose.”

Palestinian movement
Having abandoned the Economics and Russia studies, Casey is now in his fourth year at UL studying Law and Sociology, while “trying my hand at Arabic” having been in Palestine last summer.

“I’d be involved in the Palestinian movement in Ireland here and was lucky enough to spend some time in the West Bank. I really enjoyed myself, it was a real eye opener. People who I knew had said ‘you’re really not going to believe what’s going on there until you experience it yourself’. I dismissed it and thought ‘how bad could it really be?’.

“But I was actually blown away by everything that’s happening there. I was delighted to spend a few weeks there, see it with my own two eyes and I am doing my best to spread the message now here at home.”