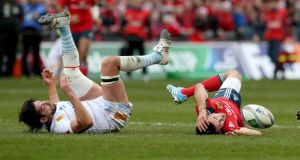 Munster’s Conor Murray was replaced in the first half after being tackled by Jean-Pierre Perez of Perpignan. Photograph: Dan Sheridan/Inpho

Munster 36 Perpignan 8: Munster made it three from three for the Irish provinces in the Heineken Cup this week - Connacht face Toulouse later this afternoon - with a facile win over Perpignan at Thomond Park but there is still plenty to work on for Rob Penney’s side if they are to be considered genuine European contenders this year.

With Perpignan displaying classic signs of French travel sickness - there was precious little effort or desire on show - the result was never in doubt but Munster’s performance was by no means perfect in front of their own fans.

All too often silly errors halted their momentum and the encounter was far from a classic. Nonetheless, first half tries from Sean Dougall, David Kilcoyne and Keith Earls eased them into a 22-3 lead at the interval and the bonus point was secured just after the hour mark, referee Greg Garner awarding a penalty try.

Earls had a second try ruled out for a forward pass but James Coughlan rounded off the scoring with a pushover try against a French pack that may as well already been on the plane home.

Notably, Munster look set to be without scrum-half Conor Murray for next week’s trip to the Stade Aime Giral after he injured his right knee 16 minutes in.

Afterwards, man-of-the-match Earls admitted the performance lacked cohesion and Munster won’t be taking anything for granted in the return fixture next weekend. “There’s still plenty to work on,” he conceded. “We knew Perpignan were coming over with a big physical pack and in fairness to our boys they stood up.

Loose kicks from Camille Lopez and James Hook immediately invited Munster forward and they needed no second invitation, putting Dougall through for a third-minute opener. Johne Murphy sent Murray into space on the left and the scrum-half flicked a lovely return pass to Murphy who sent flanker Dougall crashing over.

The conversion followed from Ian Keatley and Munster’s spritely start continued with Felix Jones almost reaching a cross-field kick from the outhalf. Keatley then knocked over a 31-metre penalty and the capacity crowd erupted when Damien Varley launched a length of the field counter-attack which was marred by a loose pass from Earls.

Perpignan found space for the first time when Watisoni Votu and Romain Terrain cut through into the 22, showing a rare glimpse of their running threat.

Munster then lost Murray, who fell awkwardly at a ruck, and both defences were stretched during a breathless passage of play with Murphy coming to the hosts’ rescue close to their posts. But the Perpignan defence cracked again in the 26th minute, their pack powerless to prevent prop Kilcoyne from muscling over from a metre out. Keatley sent his conversion wide.

The introduction of recent Italy cap Tommy Allan for Lopez brought about an improvement in Perpignan’s play, but they were back behind their try-line approaching the interval. The ball popped up from a ruck for Earls to scamper away over halfway and dot down in the right corner, with Keatley adding a terrific conversion from the touchline.

The usually reliable Hook missed a much-needed penalty on the stroke of half-time. He redeemed himself with a successful 45th-minute kick to get his side off the mark.

A tight call went Munster’s way when Sofiane Guitoune had a try ruled out for a forward pass from Luke Charteris, who was felled by Dougall after a purposeful Votu run.

Munster were too lateral at times during a scrappy third quarter, lacking the penetration to really finish the visitors off. The forwards provided it with a quarter of an hour left as they propelled a Varley-controlled lineout drive up to the line and replacement prop Kisi Pulu paid the price for bringing it down illegally — conceding a penalty try and a yellow card.

Replacement JJ Hanrahan converted and amid a helter-skelter finish, Earls missed out on his second try before the Perpignan scrum was driven backwards and number eight Coughlan plunged over from the base. There was some late consolation for Perpignan in the form of a five-pointer from winger Michel, who profited from Hook’s quick-fire pass.