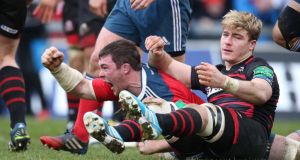 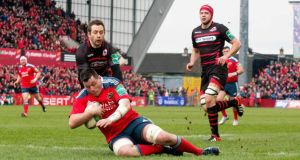 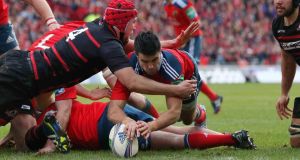 After a sticky first half that yielded two tries but just a six-point advantage over Edinburgh at Thomond Park, Munster put the foot down and ran in four more scores to secure their home quarter-final in the Heineken Cup.

After Clermont Auvergne ran in four tries on their way to a convicning win over Racing Metro later on Sunday, the prospect of hosting Leinster was avoided and Toulouse were confirmed as the team due in Limerick in early April.

It was a sluggish first half from the homeside, interspersed with moments of class, most notably from number eight James Coughlan, who thundered over immediately after Edinburgh’s Greig Laidlaw opened the scoring with one of two first half penalties.

Johne Murphy then weaved his way over from close range after Conor Murray snaffled up a loose ball that squirted out the back of the scrum and fed the wing.

After the break, Murray himself dotted down after great work from Coughlan, while captain Peter O’Mahony secured the bonus point before Simon Zebo, on for the injured Keith Earls, and Felix Jones added some gloss with two well worked tries.

Keith Earls will have a scan on his left knee tomorrow, we should have more on that in the coming days. #MunEdi

Earls was helped off in the first half after injuring his knee in the tackle when a loose Damien Varley pass put him under pressure. With early reports suggesting medial ligament damage, the Ireland back’s Six Nations must be in doubt.

Munster seem to save some of their best rugby for round six, as this was their fourth successive bonus-point success at this stage — adding to wins in previous years over London Irish, Northampton Saints and Racing Metro 92.

Edinburgh silenced the capacity Limerick crowd in the opening minutes, Tom Brown almost reaching Greig Tonks’s cross-field kick, although Laidlaw drew his first penalty attempt wide. He made no mistake with his second place-kick, punishing a scrum offence by Dave Kilcoyne — but Munster were lightning quick to respond. Paul O’Connell rose to take the restart and after a neat spread of passes out to the left, from where Coughlan — a notable absentee from Ireland’s Six Nations squad — cut in on a terrific angle to arrow his way over for the opening try.

Ian Keatley’s conversion attempt came back off the left-hand post.

The Edinburgh defence splintered far too easily in the 22nd minute — backrowers David Denton and Roddy Grant both missing tackles — as winger Murphy stepped clean through and in behind the posts. Keatley added the extras for a 12-3 lead before Laidlaw hit back with a second left-sided penalty, and the second quarter was quite an even affair.

Zebo combined with O’Connell to bring down Laidlaw just short of the tryline, following a promising set of phases from the Scots. However, Edinburgh lost the services of Du Preez after referee Wayne Barnes sin-binned him for ‘recklessly leading with the head’ when attempting to clear out O’Connell at a ruck.

The second half was just four minutes old when scrum-half Murray plunged over from a close-range ruck for his try, with Tommy O’Donnell and Coughlan tearing through the Edinburgh defence in the build-up. Keatley’s pinpoint conversion from the left put Munster 13 points clear and some neat touches from Zebo kept the province on the front foot.

The bonus point was in their grasp by the hour mark, skipper O’Mahony showing great strength to barge past three defenders and stretch over by the posts, with Keatley converting. Murray then fed Zebo for a simple finish in the left corner and Edinburgh crumbled further under the weight of forward pressure, ending the game with replacement prop Geoff Cross in the sin-bin.

Zebo’s lovely delayed pass sent full-back Jones over in the right corner and Keatley’s cracking conversion was a fitting way to end a Munster-dominated second half.