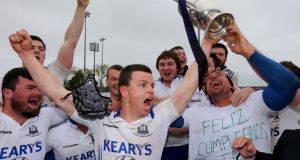 Cork Constitution retained the Bateman Cup with a hard-fought 19-6 win over UCD at a wet Temple Hill on Saturday.

Man-of-the-match Darragh Lyons scored the game’s only try and captain Gerry Hurley kicked 14 points in a deserved victory for Tom Mulcahy’s side.

The departing Cork Con head coach was delighted with his side as they secured their second trophy of the season in his final game in charge. “It was a fantastic performance, we were awesome in defence,” said Mulcahy. “I asked them this morning to play Jack Charlton rugby and just put them under pressure, force the errors and we’ll capitalise on that.”

UCD outhalf James Thornton kicked two first-half penalties for the visitors and director of rugby Bobby Byrne, who led the side to third place in the AIL, was magnanimous in defeat.

“I think Con were the better side on the day,” admitted Byrne afterwards. “Our discipline wasn’t good enough in the second half.”

It was a scrappy opening to the game as both sides struggled to get to grips with the difficult conditions.

Three minutes
The visitors struck first in the 24th minute through an excellent Thornton penalty but that lead lasted less than three minutes as Lyons touched down a magnificent individual effort.

The try came after Con won a turnover in midfield with Lyons cleverly chipping though a gap in midfield and taking advantage of two slips in the UCD defence to touch down.

Hurley added the conversion and Con led 7-3 slightly against the run of play. Thornton added a second penalty on the half-hour to make it 7-6 after Andrew O’Driscoll was shown a yellow card for coming in at the side of a ruck. UCD were unable to take advantage of the extra man, however, and Hurley kicked his first penalty just before the break to give the home side a 10-6 half-time lead.

The second half was all Cork Con as the boot of fullback Lyons kept UCD pinned back in their own half with the Con pack dominating in the set piece.

UCD prop James Tracy was sent to the sin bin for dragging down a maul in the 48th minute, with Hurley adding a second penalty five minutes later to move Con into a seven-point lead.

The dependable Hurley kicked his third penalty on 67 minutes and the win was secured when the scrumhalf added another three points with just seven minutes left to make it 19-6 and that’s how it stayed.