Misfiring Munster get the job done 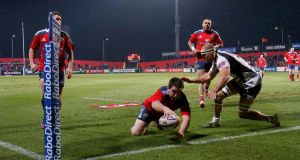 Simon Zebo and Ger Slattery scored two tries apiece as Munster defeated Zebre to move back to the top of the RaboDirect Pro12.

Zebre’s first ever visit to Musgrave Park was marked by Tommaso D’Apice’s try in the 12th minute, but Munster built a 15-5 half-time lead despite a stop-start performance.

A Guglielmo Palazzani penalty kept the Italians in the hunt before Munster touched down twice while Zebre captain Andries van Schalkwyk was in the sin-bin.

Rob Penney’s league leaders added a fifth and final try when replacement hooker Slattery crossed in the right corner with a minute left.

Munster took a while to get going and the Italians stunned the Cork crowd with a high-quality opening try.

Giovanbattista Venditti, a late inclusion on the left wing, slipped past two tacklers and handed off CJ Stander before passing for hooker D’Apice to dive over in the left corner.

The conversion was put wide by Palazzani, who donned the number 10 jersey due to the pre-match withdrawal of Ruggero Trevisan.

Munster closed the gap to 5-3 on the quarter hour when JJ Hanrahan punished Zebre lock George Biagi for a side-entry call.

Donncha O’Callaghan had an earlier-than-expected introduction on a night when he overtook Ronan O’Gara’s appearance record for the club. The lock’s 241st appearance arrived in the 18th minute when he came on for the injured David O’Callaghan.

The hosts began to click into gear in the second quarter and following an Ian Keatley-inspired break in the middle, there were numbers wide on the left where Zebo spun away from Brendon Leonard to score in the corner.

Hanrahan converted and Felix Jones was called back for a forward pass from Zebo, who was on his toes throughout as he looked to impress the Irish management.

There were a couple of near misses as marauding forwards Stander and Billy Holland were hauled down in the visitors’ 22, and Zebo then evaded Kameli Ratuvou’s grasp to glide over in the right corner.

Hanrahan missed the difficult conversion, ending his run of 19 successful place-kicks in a row, but Munster were beginning to find some rhythm at 15-5 up.

Former All Black Leonard raced into Munster territory to set up an early Palazzani penalty which closed the gap back to seven points.

There were few incidents of note during a substitution-filled third quarter, and it was only after Van Schalkwyk saw yellow for infringing close to the Zebre line that Munster zoned in on the bonus point.

A powerful lineout maul did the trick as Slattery was driven over in the 62nd minute and Keatley converted for a 22-8 scoreline.

South African Stander, the man of the match, then took a quick tap in the 70th minute and a swift recycle from the ruck saw his back-row colleague O’Donnell squeeze in for the bonus-point try.

Keatley again added the extras and his final and most difficult kick of the night was also on target, as he converted after Duncan Williams put fellow replacement Slattery over by the corner flag.

Jota forgets penalty miss to steer Liverpool past West Ham 20:08
Dean George bags a hat-trick as Athlone stun Shels 19:27
England lay down marker for Ireland after bonus point win in Rome 19:09
Dublin return from the dead to give Kilkenny a scare in Croke Park thriller 18:57
James McClean nets for Stoke as they beat Rotherham 18:35
Crossword Get access to over 6,000 interactive crosswords