Mike Sherry out for another six months 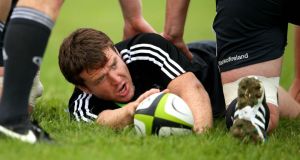 Munster hooker Mike Sherry will be sidelined until the new year following a second shoulder surgery.

The unfortunate Sherry underwent an operation last January and was working his way back to full fitness during the pre-season training when a routine check-up onhis shoulder raised a separate issue.

He underwent an operation last Friday and will be out of action for five to six months. Luke O’Dea who sustained a knee injury in the Limerick Sevens will be sidelined for three to four weeks while Gerhard Van den Heever, another casualty of the Sevens competition is currently in a knee brace and will remain side-lined for another four to five weeks.

Keith Earls will be an absentee for a similar period after he tweaked a knee at a recent Ireland training camp.