‘If you’re looking to leave a legacy somewhere, you don’t want to hit back at it’ 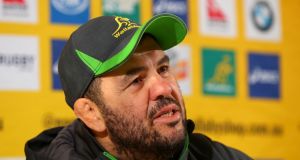 Michael Cheika has accused Eddie Jones of tarnishing his legacy with his “vitriolic” comments about Australia during the series whitewash over the Wallabies last summer, and denied claims England were disrespected by the Australian media during the tour.

Jones, whose side will equal their record winning streak of 14 if they beat the Wallabies on Saturday, stepped on to the offensive before the 3-0 series win in June, revealing his plans to play “Bodyline” rugby, and claimed having his bag searched at Brisbane airport was part of a “co-ordinated” plan to help the Wallabies win the first Test.

The England head coach was then incensed by Fox Sports’ Stephen Hoiles, whose lines of post-match questioning were laced with sexual innuendo, and accused the Australian broadcaster of a “disgusting and demeaning” promotional video in the build-up to the first Test.

Jones’s comments were, on the whole, directed at the press but Cheika believes his former Randwick team-mate overstepped the mark.

“There was a lot of vitriol about Australia - his home nation where he coached and where his opportunities were given to him to catch and grow up as a coach and play,” said Cheika.

“Personally, if you’re looking to leave a legacy somewhere, you don’t want to hit back at it, do you?

“I certainly wasn’t [disrespecting England] and the players weren’t. I don’t think the media did either. (Hoiles) gave him a serve as a joke in a press conference. I think he has called him since and said it was a joke. I think (Hoiles) was a bit rattled by it as he’s only new in the media.

“For a kid like him it’s his career. It might be fun and games for the other guy, but for a kid like (Hoiles) he is trying to build his career, but there was no disrespect. That’s the way she rolls.”

After England had won the series with their second Test triumph in Melbourne, the New Zealand head coach, Steve Hansen, accused Chieka of being bullied by Jones. Cheika, however, defended his refusal to enter into a war of words with Jones at the time.

“In June, maybe I gave the opportunity to see how a former Australian would deal with it. It was a bit like a goal-scorer who scores against his old team. I suppose it is always difficult where you go back against a team you have coached before and don’t know how to play it,” he added.

“Do you stay reserved or get stuck into them? I know what I would do. But that’s the choice he makes if he thinks it’s best for his team.”

Following England’s win over Argentina, Jones said he would be meeting with the referee on Saturday, Jaco Peyper, to discuss Australia’s scrummaging and last week appeared to strike his first blow nine days before the Wallabies arrive at Twickenham - describing the Pumas as the second best team in the Rugby Championship despite finishing fourth.

After Australia’s 27-24 defeat by Ireland on Saturday, Cheika shrugged off Jones’s scrummaging jibe but was more angry that his side lost the penalty count 13-3 and said he would be seeking a meeting with Alain Rolland, the World Rugby referees chief.

But asked if he had heard from Rolland, Cheika said: “No I haven’t. He hasn’t got back to me. You’ll have to ring him and ask him where it’s at. I can’t be answering questions on his behalf. I made my calls the other night, and the ball’s in their court now. If they do want to get back to us, I don’t know.”

Keith Higgins becomes the latest Mayo stalwart to hang up his football boots 12:54
‘Don’t write me off yet’: Conor McGregor to fight on after Poirier knockout 11:35
Tony Finau shares the lead heading into last round in La Quinta 11:21
Sunday’s Thurles card called off due to snow 11:10
Conor McGregor stopped by Dustin Poirier in second round 06:33
Crossword Get access to over 6,000 interactive crosswords