Matt Williams: Ireland’s attacking system fails big test against one of the best 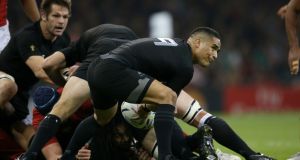 Aaron Smith: his Otago Highlanders team were playing at a tempo way above anything I had experienced. Photograph: Billy Stickland/Inpho

Last April I had the opportunity to visit the ‘land of the long white cloud’, New Zealand. It was a great gig. I was to watch, coach and investigate rugby. Despite all my friendly poking at my Kiwi cousins, it was a trip I cherish.

Not only is New Zealand a land of great beauty, peopled by generous and friendly folk, but it is the only country on the planet that has rugby at the very heart of its being.

The epicentre of the beating rugby heart is Canterbury on the South Island. Or as the locals say, “the mainland”. I had the privilege of watching my former assistant coach of Scotland, Todd Blackadder, run a Crusaders session and then attended the match against the Otago Highlanders.

I have coached in the Super competition, the Heineken Cup and the Six Nations. I have been around many top- level professional rugby teams and their training session for over 25 years but I have never seen a training session executed with such staggering pace and accuracy as the ones I attended in New Zealand.

Simplicity was at the core of the coaching session. There was nothing that a good 15-year-old rugby player could not understand. No complex attacking moves, no bizarre defensive systems, just brass tack basics, repeated with excellence and speed, again and again and again ...

I walked away from the session mightily impressed.

I thought Canterbury would be unbeatable in the upcoming match. It was about 10 minutes into the game against the Highlanders when I started to realise the rest of the world was in real trouble.

Both teams were playing the same systems, yet as fast and as accurate as the Crusaders were, the Highlanders were faster and more accurate.

Aaron Smith’s astonishing pace and passing moved the ball from one side of the field to the other so quickly that the Crusader defence could not adjust in time. The Highlanders romped home.

The Highlanders were playing at a tempo way above anything I had experienced. I doubted that any team in the world could stand toe-to-toe with them. The pace was several levels above anything played in Europe.

It is common knowledge that the Kiwis have a simple, yet highly effective national plan. Every provincial team and Super team in the country plays the same style as the national team. Once a year every coach attends a conference and every coach has to explain to the group any new technique or innovation that has caught the eye of the national coaches. There is no holding back or hiding.

If a team has an effective maul, the coach has to explain in full detail to every other coach how he made it effective. The collective of New Zealand rugby is then stronger.

Bench players are highly encouraged to move provinces to other Super franchises, in order to get game time.

Like in all walks of life, excellence is a habit and success is a choice. The choices the New Zealanders make in demanding their coaches have the national team at the core of their coaching is highly unique. Others give it lip service, the Kiwis live it.

Argentina have copied the New Zealand book word for word and more power to them, because it is working.

Last Monday the front page of the French rugby bible, Midi Olympique, was black, with only the words “Carnet Noir” printed large. It translates to “the death notice” of French rugby. The paper was honest in damning the Top 14 as being at the heart of the French national team’s demise. What was wrong was that it has taken the French so long to admit its internal systems are the root cause of the national team’s horror.

Until now, all in France blamed the coaches for the national team’s performance. That is pure ignorance. National systems produce national teams and the French system is badly broken.

Introspection is never comfortable, however it is a cathartic process that Irish rugby requires. I have been directed to a wonderful document from the IRFU on the technical direction for rugby in Ireland. It details the vision for Irish rugby play into the future. Those responsible for its construction did a commendable job.

However, the IRFU technical department can’t force teams across Ireland to adopt its recommendations.

The national Irish team’s attacking philosophy needs to be played by all four provinces, all academies, all our leading schools and underage clubs. More than any other country, the Irish system is geared for an island-wide approach to a national philosophy.

However, constant box-kicking from the scrum half and a refusal to counterattack is not an attacking philosophy with any hope of success.

Argentina was the game when the Irish needed to score a lot of tries and their attacking systems were not capable of delivering. However it should be no surprise. It has been on display for over a year.

When I was watching the Highlanders play at a staggering pace, Ireland were box -kicking their way to winning the Six Nations. This did not prepare the team for the pace and power of the Southern Hemisphere teams at RWC 2015.

If you have read this column over the past 12 months you will know I have been warning you. This weekend we can all sit back and watch as both Argentina and New Zealand reap the benefits of their internal national systems.