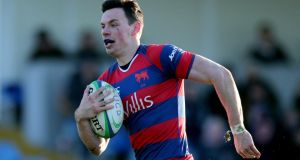 Clontarf’s Matt Darcy runs in a try at the Belfield Bowl. The player could play an important role for the Ireland Club international team in the coming weeks. Photograph: Ryan Byrne/INPHO

Matt D’Arcy heated up a bitterly cold Belfield Bowl with a terrific hat-trick of tries as Clontarf claimed a 38-17 bonus point win over UCD in Ulster Bank League Division 1A.

D’Arcy, who could play an important role for the Ireland Club international team in the coming weeks, scored three of Clontarf’s six tries against a College side that was missing eight Ireland Under-20 internationals. It was a vital result for the defending champions after their 35-0 hammering by Lansdowne last time out.

Leaders Lansdowne also chalked up another bonus point, registering their eighth league victory on the trot as they overcame Ballynahinch 39-18 on the Aviva Stadium’s back pitch.

Ballynahinch made the early running thanks to an Aaron Cairns try, and two booming penalties from Chris Quinn had them leading 13-10 with the interval in sight. But Mike Ruddock’s men fought back to lead 22-13 at the break and Ross Adair’s seventh league try was Ballynahinch’s only score of a one-sided second half.

Lansdowne’s firepower is proving too much for their play-off rivals at present, with 74 points scored in their last two games.

Old Belvedere also picked up a victory at home to Young Munster, racking up four tries as they ran out comprehensive 38-18 winners over the Cookies at Anglesea Road. Cathal O’Flynn, Conor Owende and Daniel Riordan also dotted down.

Terenure College benefited from some clinical finishing as they made it back-to-back successes with a 31-18 dismissal of bottom-placed Dolphin at Lakelands Park. First half tries from Ian Hanly and Harry Moore (his eighth of the campaign) set them on their way.

Meanwhile, Garryowen remain just a point behind Division 1B leaders Galwegians, but they had a major scare before squeezing past Belfast Harlequins 17-16 at Dooradoyle. It took a last-minute penalty try, converted by Jamie Gavin, to seal it.

Ballymena got back to winning ways at their Eaton Park base, bagging a bonus point in the process as they overwhelmed UL Bohemians 33-12. They chalked up a penalty try and efforts from John Andrew, Dave Shanahan and Andrew Warwick.

The Dublin University juggernaut rolled on at Gibson Park where the students made it ten games unbeaten thanks to a stylish 41-19 triumph over a stunned Malone outfit. The run of scores included a brace from number 8 Tom Ryan.

Shannon gained a positive result at home to struggling Corinthians, with a David O’Donovan penalty splitting the sides at 15-12 in Coonagh.