London victims in the thoughts and prayers of Lions squad 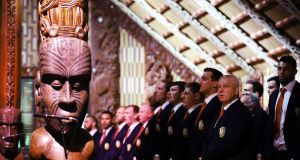 British and Lions head coach Warren Gatland sings with the rest of the team in the meeting house during a Maori welcoming at Waitangi Treaty Grounds. Photograph: Getty Images

Today’s Maori welcome to the Lions squad assuredly constituted one of the most memorable non-playing days of the tourists’ six week tour of New Zealand, but just as the biggest powhiri in these parts for many, many years was about to commence in the northern town of Waitangi at around 10.45am local time on Sunday morning, 11.45pm on Saturday evening UK time, news had been filtering through of the latest terrorist atrocities in London.

After the conclusion of the welcome, attended by an estimated 400 Maori warriors and watched by an estimated 3,000 people comprising a mix of New Zealanders and Lions supporters, the squad’s team manager, John Spencer, addressed the media.

“We’ve only just heard that there’s been a tragedy in London today. We don’t know any detail about it but we understand that there have been tragedies, and I just want to send our best wishes to people back home, but also to say that anyone who has been injured there, you and your families are certainly in our thoughts and prayers, and we will be thinking about you. As I say, we don’t know the details but we’re very anxious to make that known back home.”

Following the Lions less than auspicious 13-7 win over a Provincial Barbarians XV in Whangarei on Saturday, the squad made the hour-plus coach drive via State Highway 1 to the iconic Waitangi Treaty Grounds, where the welcome took place under clear blue skies with a panoramic view of the Bay of Islands.

More than 300 warriors, both male and female, welcomed the Lions, and had been drawn together from all over Northland and beyond, with Maoris based in Sydney flying over to participate. During the welcome, which lasted over an hour and a half, the squad received three challenges.

An incredible welcome for us at the Waitangi Treaty Grounds.

After the squad began to emerge from a pathway through the grounds, the first challenge was in front of a ceremonial war canoe Ngatokimatawhaorua, which was a private challenge for the Lions squad and not open to the public although relayed on a large screen.

From there, a line of close on 90 people, including 41 players, management staff and auxiliary staff attached to their various commercial partners, walked up the hill in a line to accept the second challenge, which was accepted by Warren Gatland.

From there they slowly advanced to the final challenge point, in front of Te Whare Runanga (Carved Meeting House), which prompted a Karanga (call of welcome) and prolonged haka/Powhiri (welcome chant). After accepting this third challenge, the warriors and Lions party went inside the Meeting House, where the tourists performed each of their four chosen songs for the tour, Highland Cathedral, Jerusalem, the Fields of Athenry (which was preceded by Robbie Henshaw making an address in Irish) and Calon Lan.

That was like nothing I’ve experienced before. That was brilliant

Describing it as an “absolutely fantastic ceremony, a wonderful welcome by the Maori people here,” Spencer added: “We have great respect for their traditions, their culture, their language, their heritage which started here of course, but also for their Haka, and for their harmonies.

"So it’s been an absolute privilege to be a part of this. This isn’t a ceremony that’s extended to very many people, so we feel very privileged.”

The Lions captain, Sam Warburton, has experienced “quite a few” Maori welcomes from his time as Wales captain at the 2011 World Cup in New Zealand, and Wales’ three-test tour last summer, but admitted: ‘That was like nothing I’ve experienced before. That was brilliant.

“The day and the setting made it even more special. Off the rugby field, that was probably one of the best experiences I’ve had. All the players came out of there in awe really.”