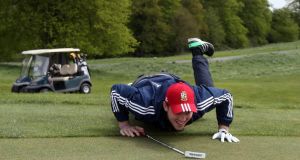 Wales’ George North gets in some golf practice during yesterday’s Lions Down Day at Carton House, Maynooth, yesterday. Photograph: Inpho


British and Irish Lions assistant coach Graham Rowntree insists the first Test match against the Barbarians on Saturday, June 1st is not just an easy romp against a ‘”throw-around” team.

The Barbarians have traditionally been a side that emphasised entertainment value sometimes at the expense of the result. But the former England loosehead believes the first match of the tour is an important one for the squad.

“It will be a different challenge, the humidity . . . it’s the first hit out for these guys and they (Barbarians) have some class players,” said Rowntree.

“We play them every year at Twickenham and we think it’s going to be this razzmatazz team where they throw the ball around. Remember four years ago we were beaten. There’s good enough players there to cause potential upset and they keep adding to it. It will be a good work-out for us and we are taking it very seriously.”

The Barbarians will be coached by London Wasps’ director of rugby David Young with their tour kicking off with the annual match against England at Twickenham on Sunday, May 26th, before the squad fly to Hong Kong.

First match
The match against the Lions is the first major rugby international in Hong Kong since the second Bledisloe Cup encounter between the All Blacks and the Wallabies in 2010.

“I know what you mean,” said Rowntree when it was suggested the Ba Bas are a fun team.

“But whoever we are playing first up, it’s our first game and the first opportunity for a lot of these guys in a Lions shirt. There are a lot of things that go with a Lions shirt that players have to get right. There is a lot of responsibility.

“Regardless of whether it’s a Barbarians team or not we will be taking it very, very seriously.”

Jaque Fourie, Sergio Parisse, Martin Castrogiovanni, Imanol Harinordoquy and Ulster’s Jared Payne are all tied into playing in the opening game for the Ba Bas.

In 2009 they beat the All Blacks for only the second time. The last match in which that happened, in Cardiff in 1973, is part of rugby folklore.

“There are potential banana skins in the schedule,” added Rowntree.

“We have to be switched on. It’s the wrong end of the season for many of these guys so we’ve been very mindful of that and it means we have got to be very accurate in what we are doing.”