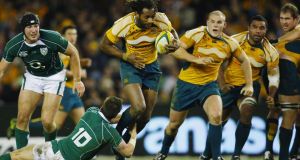 Lote Tuqiri in action for Australia against Ireland in 2008. Photograph: Cameron Spencer/Getty Images 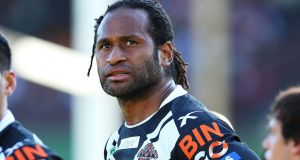 Lote Tuqiri of the Tigers looks on during the round 24 NRL match between the St George Illawarra Dragons and the Wests Tigers at Sydney Cricket Ground. Photograph: Brendon Thorne/Getty Images

Leinster are set to sign Fijian-born former Australian international wing Lote Tuqiri on a three month contract. He is due to arrive as cover for Springbok Zane Kirchner whose current involvement in the Rugby Championship with South Africa has put back his arrival date in Ireland until October.

The dual code international, who will be 34 in a fortnight, is expected to arrive in Dublin over the weekend and will link up again with Leinster coach Matt O’Connor for a second time. Tuqiri spent a season (2009-2010) at the Leicester Tigers where O’Connor previously coached.

The six foot three inch Tuqiri won 67 caps for Australia between 2003 and 2009 scoring 30 tries before switching back in 2010 to rugby league and a contract with the Wests Tigers in the NRL. He suffered broken arms in both the 2011 and 2012 campaigns.

The unfortunate injury that befell Eoin O’Malley forcing him to retire from the game meant that Leinster are looking, not for another centre as they feel they have adequate cover in that area, but a back three player. Tuqiri though is here to cover Kirchner’s absence.

Tuqiri offers a huge physical presence and at his best was one of the most devastating try scorers in world rugby.

He initially started in league with the Brisbane Broncos (1999-2002) and played for the Kangaroos - Australian national side in league - both before and after his career in union.

Meanwhile Leinster confirmed that Luke Fitzgerald felt tightness in his groin during the second half of the province’s impressive bonus point win over the Scarlets in the RaboDirect Pro12 at the weekend and was withdrawn as a precaution.

Tighthead prop Martin Moore, the opening try scorer in the victory, received treatment for a cut on his nose which required stitches. It is hoped that both players will be available ahead of Friday’s midday team announcement.

Fergus McFadden was a late withdrawal from the game at Parc y Scarlets with a tight hamstring, but it is expected that he will be in the frame this week and he could be joined by Ian Madigan. Sean O’Brien continues to make positive strides on his arm injury and is expected to return over the coming weeks.

Michael Bent (neck), however, is still unavailable while Quinn Roux rolled his ankle in training and is a doubt for Saturday’s game.