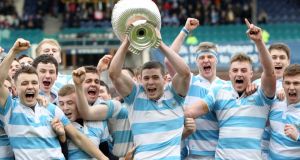 A very distinct pattern has emerged in Leinster schools rugby with Blackrock or St Michael’s College constantly leading the way. In 2015 St Michael’s College are favourites to capture the Senior Cup with two particularly outstanding players in James Ryan and Max Deegan leading a massive pack of forwards.

Blackrock, who start their campaign against Terenure College, are looking for a three in a row. The last time that was the case was in 1997 when Brian O’Driscoll’s team were beaten in the semi-final by Gordon D’Arcy’s Clongowes.

Peter Smyth’s latest group are a young side but should include the sons of former Ireland internationals Paul Dean and Brendan Mullin. Success for St Michael’s would give them only their third title, the first coming as recently as 2007 before Dan Leavy’s excellent crop saw off Clongowes Wood and the Byrne brothers (Bryan and Ed) in 2012.

St Michael’s have what, in theory, should be a tough opening assignment against St Mary’s. But it won’t be.

It’s also worth noting that most matches will take place on Donnybrook’s new all-weather 4G surface. For starters, there won’t be any postponements when the February weather blows in. “I’ve played on it twice with the A’s and enjoyed it much more,” said Leinster scrumhalf Luke McGrath whose St Michael’s outfit lost the 2010 final to Clongowes.

“When it’s wet you are still able to throw the ball around but when it is dry it is really quick. It’s going to really showcase the speed and skills of schools rugby.”

This year’s final takes place at the RDS on St Patrick’s Day.

St Michael’s are also the team charged with stopping Blackrock from capturing three in a row at junior level.

The Blackrock and Clongowes game is a tasty opening-round tie in early February, with Terenure, also genuine contenders, starting out against the King’s Hospital.