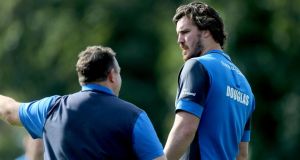 Leinster’s Kane Douglas: struggled to nail down a starting role in the province last season after suffering a string of injuries. Photograph: Ryan Byrne/Inpho

Leinster are demanding a €250,000 release fee for their Wallaby lock Kane Douglas, according to reports in the Australian media.

Douglas, one season into a three-year contract, was called up to Michael Cheika’s extended squad last Friday ahead of the Rugby Championship after the Australian Rugby Union activated regulation 9, the international player release clause.

However, ARU rules prohibit a player from inclusion in Test teams while contracted to a foreign club unless he has 60 caps and previously played seven years in Australia. Douglas has 14 caps.

This new ruling, which is known as the Giteau Law, was introduced to allow Cheika recall Toulon pair Matt Giteau and Drew Mitchell.

Australia clearly lack quality at secondrow but a solution was found in the case of Dean Mumm. The Exeter Chiefs captain has left the English Premiership club this summer to rejoin the New South Wales Waratahs.

The intention is to send Douglas to the Queensland Reds in 2016 with the Sydney Morning Herald stating: “It is understood Douglas would almost certainly favour a move to Ballymore for family reasons.”

Cheika said: “I’m hearing there’s some noise he wants to come home. If he is coming back to Australia to play and signs with an Australian Super Rugby team, of course we’d be interested in providing a top-up. But I think he’s still in contract in Europe.”

Even though Mike McCarthy missed out on Joe Schmidt’s 45-man preliminary Ireland squad, Leinster are currently down 25 bodies with 13 Irish forwards, 10 backs, Douglas and Springbok hopeful Zane Kirchner all fighting for inclusion in World Cup squads.

On Monday Leinster manager Guy Easterby said: “We have been in discussions with the Australian Rugby Union and with Kane for a few weeks now and we have made our position very clear. Kane is contracted to Leinster Rugby for another two seasons and we look forward to welcoming him back when his commitments with the ARU come to an end.”

In short, this is out of Leinster’s control but he won’t be released from his contract without compensation.

Douglas’s situation is due to a change in Australia’s eligibility rules from when he was initially signed. Former Leinster coach Matt O’Connor previously said Australia could never start picking overseas players as it would decimate their Super Rugby squads.

Douglas struggled to nail down a starting role in the province last season after suffering a string of injuries when moving straight from Super Rugby champions the Waratahs, who are also coached by Cheika. He also only recently recovered from back surgery.

Kirchner is currently among a 36-man Springbok squad but there are 13 injury-listed players so the likelihood is he will return to Dublin by early September.

Regardless, interim Leinster head coach Leo Cullen will be joined by his full coaching team next Monday as Kurt McQuilkin, John Fogarty and Girvan Dempsey prepare Leinster for the Pro 12 campaign which starts September 5th.

1 Ken Early: Despite coronavirus, Premier League season must be finished if at all possible
2 Harry Kane: I won’t stay at Tottenham ‘for the sake of it’
3 ‘Magnificent’ Conor Connelly remembered after sudden death
4 My favourite sporting moment: When Zidane glided through Brazil in 2006
5 Summer tours next in line for postponement as rugby assesses options
Real news has value SUBSCRIBE

Ken Early on finishing the Premier League season, favourite sporting moments 08:03
New Zealand Rugby forced to cancel lower tier competitions 07:20
Harry Kane: I won’t stay at Tottenham ‘for the sake of it’ 07:39
Competitive instinct will ensure sport returns as it always was 06:30
Ken Early: Despite coronavirus, Premier League season must be finished if at all possible 06:00
Here is your handy guide to sport on television this week