Stade Félix Mayol holds only 15,400 but under ERC rules travelling fans are entitled to purchase 25 per cent of the capacity (3,841) 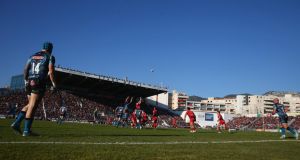 Stade Félix Mayol (above) holds only 15,400 but under ERC rules travelling fans are entitled to purchase 25 per cent of the capacity (3,841).

Despite the Sunday evening fixture, Leinster have confirmed they will be taking their full quota of tickets for the Heineken Cup quarter-final against Toulon on April 6th.

The Stade Félix Mayol holds only 15,400 but under ERC rules travelling fans are entitled to purchase 25 percent of the capacity (3,841).

It was estimated that around 11,000 made the trip for Leinster’s semi-final win over Clermont Auvergne in Bordeaux two years ago. There was 32,397 in total at the Stade Chaban Delmas and that was also a Sunday fixture.

In contrast, Munster and Ulster are not expecting a similar demand from Toulouse and Saracens fans.

No more than 500 of Thomond Park’s 26,500 capacity will be filled by French spectators for their lunch time (1.30pm) quarter-final against the most successful European club.

In comparison to the Irish provinces, Saracens have a small supporter base with attendances for their home Premiership matches ranging between 6-7,000.

They did, however, entice over 60,000 into Wembley stadium for the round two tie against Toulouse last October.

Still, only a few hundred are expected to take up tickets for the evening kick-off (6.30pm) at an almost redeveloped Ravenhill.

It’s conceivable, if Ulster and Leinster win their quarter-finals, that both semi-finals will take place at the Aviva Stadium over the weekend of April 25th-27th.