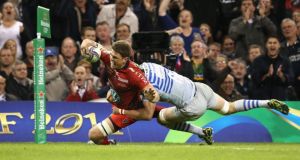 Juan Smith of Toulon dives over to score a try during the Heineken Cup Final between Toulon and Saracens at the Millennium Stadium thhis year in Cardiff. Photograph. David Rogers/Getty Images

Juan Smith, who last year retired from rugby due to an Achilles injury, has completed a remarkable comeback after being drafted into the South Africa squad for the Rugby Championship opener against Argentina next week.

Smith, a recent winner of the French Top 14 and Heineken Cup with Toulon, has been brought in as cover for lock Victor Matfield, who has been ruled out of the Pumas clash on Aug. 16 with a knee complaint and could be missing for longer.

Although he has spent most of his career as a loose-forward, Springbok coach Heyneke Meyer believes Smith can play lock too if needed.

“Our need at this stage is to draft in a player who can cover lock and loose forward, and we feel Juan is the right man for the job,”

Meyer said in a press release from South Africa Rugby. “He has played lock before in his career and won an Under-21 World Cup in that position, but he also covers flank and number 8. I spoke to him on various occasions and he’s comfortable with playing in the second row again if the need arises.

“However, as a number of our loose forwards have had a very high work load this season, it’s good to have someone such as Juan who can also provide cover in those positions.”

Meyer said he wanted to call on Smith for the June tests against Wales and Scotland, but was unable to do so.

“We wanted to involve him in June as I really want to work with him, but he was not 100 percent fit and asked not to be considered,” said Meyer.

Smith retired from rugby in early 2013 after a battle with an Achilles injury, but was persuaded out of retirement by Toulon in September last year and became a key member of their trophy-winning side. He is a World Cup winner in 2007 and has 69 test caps to his name, the last of which came against England in 2010.