Joey Carbery breakthrough shows there is talent in domestic league 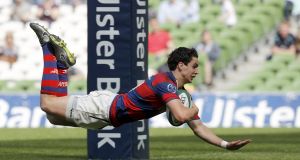 Joey Carbery’s breakthrough has highlighted the talent on show in the domestic league. Photograph: Inpho

, and it does so buoyed by its contribution to the four provinces in the opening round of Pro12.

The stand-out example is, of course, Joey Carbery, who backed up a try-scoring man-of-the-match display in Clontarf’s win over Cork Con in last season’s Division 1A final last May with a two-try man-of-the-match performance in his full competitive debut for Leinster in their Pro12 win over Treviso at the RDS last Friday.

Brian Byrne, a ’Tarf teammate that day, was beside him again on Friday, while another try-scorer in last season’s final, Darren Sweetman, started in Munster’s win away to the Scarlets, as did centre Dan Goggin, a regular in Young Munster’s run to last season’s semi-finals. Ballymena’s tighthead, Ross Kane, made his competitive Ulster debut in their win over the Dragons.

Connacht have a cluster of players whose pro careers were launched, or re-launched by the club game, be it Craig Ronaldson, Matt Healy and Niyi Adeolokun, or the core of young forwards who were playing for Corinthians regularly until a season ago.

Carbery is likely to leave a void at Clontarf, but a welcome one in many respects, as their coach Andy Wood admitted. “The way he played was how he played for us last year. Personally, I’m really delighted that he’s obviously been given a brief to go and play. Hopefully the team can be built around him, or when he gets his opportunities that his talents are brought to the forefront, which you saw last week. It was a pretty outstanding debut.”

Like Wood, Carbery was born in New Zealand, although raised in Athy and schooled in Blackrock College, but Wood plays down the influence of Carbery’s formative years in their native land as a reason for his running game.

“I don’t know whether that’s because he’s a Kiwi or just because he’s a good player. He does definitely have an eye for space. I guess a lot of that is instinctive. I know his dad was a good player and is a good coach, so I guess the environment he was brought up in would have encouraged him to play in that manner. Plus, there’s his athletic ability.”

“It’s tough to give up when you’re playing with lads that you were in school with. I would have played with Fionn in school and to play together again is a good buzz, and there are lads that I would have known and played with since I was seven or eight. I suppose it’s real rugby again. It’s no one’s job. We’re doing it because we want to be there, Mondays, Tuesdays and Thursdays, and play for our local club.”