Ireland all about plan, process and performance as they front up to All Blacks again 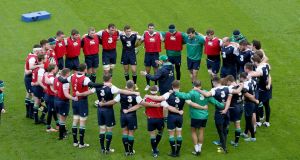 The Ireland players form a ring around Joe Schmidt at the Aviva Stadium as the head coach delivers instructions. Photograph: Billy Stickland/Inpho

A New Zealand television journalist crystallised Joe Schmidt’s Ireland with the final question of Thursday’s press conference: “Joe, you always talk about matching intent with execution. A lot of people would say the Irish intent came out passionately but doesn’t last the whole way. You have found the balance there. What is the key to finding that balance between passion and intent?”

Schmidt repeated something Johnny Sexton had uttered about everything being “performance-based, process-driven”. Stay the course. Deliver message.

Funnily enough, Donnacha Ryan delivered the exact same phrase not moments later when asked if the time of Ireland’s isolated big victory was in the past. Tadhg Furlong too. CJ Stander the other day. It’s not a prepared script, so it must be ingrained after three years of massive, historic leaps.

In Westworld, HBO’s epic new television series, chief programmer Robert Ford, played by Anthony Hopkins, creates a society of artificial intelligence. Eventually the “hosts” start thinking for themselves and rise up. One by one, having been designed by humans to be smarter than humans, the realisation dawns upon them that nothing is impossible.

“The hosts are the ones that are free. Free. Here. Under my control.”

There is increasing evidence, gathered these past four Novembers, that Carton House has been transformed into a secret laboratory to design increasingly flawless rugby specimens.

The All Blacks seemed awfully like AI this week, all glassy-eyed with their monosyllabic, barely quotable, almost lifeless demeanour.

Of course they are nothing of the sort – they are human beings like you and me and, eh, Joe Schmidt. Emotion is a fundamental part of New Zealanders’ rugby programming. They will tap into the first anniversary of Jonah Lomu’s passing. Their haka will provide fuel for the machine to crank into gear, but when the motor is humming the game becomes all about robotic accuracy.

Ireland are replicating so much of this because their primary operating technician is writing, in many cases re-writing, code memorised since infancy.

If you get all your options from the opposition, Schmidt had better come up with something his mentors know nothing about.

“Gee, I hope so,” said Schmidt, wearing his most polite face, when asked if he has a plan when New Zealand inevitably tighten up their discipline and lineout. Can other pressure points be squeezed by Ireland? “They are going to get in amongst us a little bit more. If we are denied this access point you got to go looking for other ones. We’ve worked on potentially where they may be.”

Something flickered behind that cold All Black stare when Ireland responded, via Robbie Henshaw’s vicious try, after being squeezed back to 33-29 in Chicago.

“Normally on another team – not on this team – you go behind the posts and there’s stress and there’s a lot of talk,” CJ Stander said. “But with us there was calm.”

Sexton embodies this serene state: “We just got back to the plan . . .”

The plan. The process. Cut a path into New Zealand’s 22, trust the set-piece, and the playbook would guide them home. The Henshaw try was supposed to be rolled out against the Springboks but Ireland couldn’t secure the position. It was embedded in their collective system.

The plan has worked time and again. In victory – Paris in March 2014 after the low of November 2013. A clean two-zero scalping in Argentina was followed by the breaking of unimaginable ground – the Six Nations retained.

The World Cup followed. Over-reliance on individuals was abolished. So much so that Peter O’Mahony cannot force his way back in today. The plan is simple: never again will Schmidt’s Ireland break down due to irreplaceable parts.

“I think it definitely happened through the [2016] Six Nations and summer tour,” explains Sexton. “With the amount of injuries that we had losing senior players, especially in the Six Nations and again in South Africa, we built a good bit of depth.”

Proof followed with the win in South Africa last June (no Paul O’Connell, Sexton, Cian Healy, Seán O’Brien). Those second and third Tests, piloted by Paddy Jackson, and neatly glossed over by sponsors, will forever haunt Ireland when this extended Schmidt era finally concludes. So will All Blacks (part 1) but the lessons learned thereafter delivered such a glorious 11-point victory in Soldier Field. Jack McGrath had a beer. Ultan Dillane wore a pointy hat. It was Irish and it was superior.

“Win the moment in front of your face.” Paul O’Connell said that. He was quoting Schmidt. “I realised I could apply it to every part of my preparation for rugby.” O’Connell was rebooted as the leader in late 2013.

The Schmidt system not only identifies flaws, it empowers players to remedy them. He spoke about listening to his gut last week before slavishly analysing all the data, consulting with assistants and then realising his gut was correct all along.

This brings us to a realisation that Ireland, the rugby team, are no longer rooted to a historically chosen character: the brave, emotional also-rans. Unskilled Paddies who will bruise your skin with heavy knuckles yet be drained at the commencement of crucial point-gathering moments.

No, nowadays, as the recent scalping of the All Blacks displayed, Ireland will remain in the contest and punish error with ruthless efficiency.

“From our point of view, we are process-focused,” replied Ryan. “Just focussing on this game.”

That answer was an answer in itself. No up or down, just level minds.

“Absolutely. For the last game, it is no different to this game,” Ryan continued. “It is detail-focused. If we start measuring your performances on emotion, you are going to get those seismic changes. It’s about dealing with the detail and processes and how you execute them under pressure.

“The small margins in this game are enormous. A finger tip to a ball is absolutely huge. That’s what a lot of these big games hinge on. If you do focus on the emotions a lot, you do have those massive trends. I think we are in a good place to focus on those details and processes and try to execute them.”

In a roundabout way, Schmidt ended his weekly conference by saying: win the moment in front of you. He prepares for the media not unlike how he prepares for the opposition: Overwhelm them with detail (players not only know which rucks they are hitting but the specific player they will be removing), isolate weak points and then press.

Press again. When the crack inevitably appears, pour through.

The system evolves, perfects itself. But there is one common denominator. South Africa won the Test series 2-1. Fine. Ireland will beat New Zealand. Why? Because the Schmidt era has broken the cycle of heroic Irish wins standing alone.

“We have shown at times that we have got over that,” Sexton agreed.

“Last November we beat South Africa and Australia back-to-back. There is still an element, we have spoken about it a little bit, about needing to back it up. Really that is performance-driven, turning up on the day, making sure we are emotionally and physically ready to go, in the same frame of mind we were the last time.

“And then the result will come after that.”

The marvel of Schmidt’s Ireland comes back to the creation of depth in almost every area. He said all along that each position needs to be three or even four deep in quality to compete with New Zealand and whoever is the second best team in the world (currently England).

Scrumhalf and secondrow stocks remain worryingly low behind Devin Toner and Conor Murray. But consider that Ultan Dillane, Keith Earls and O’Mahony can return for Australia.

“I’d say there were tough decisions this week for the coaches,” said Sexton. “We are going to need that for the next World Cup and before that even. For the Six Nations.”

They will also need to download the constantly updated Schmidt plan.

The All Blacks seemed too perfect to be human. Until Chicago. They were unflinching again in Rome but occasional glitches do happen.

Irish players, after three and in some cases six years wired into the Joe Schmidt way of performing, made fewer mistakes than the world champions. Result? Victory.

Who wouldn’t buy into that philosophy? Of course Joe Schmidt is an incredibly engaging person.

He knows something ominous is coming.

“They have a skill level that’s unbelievably good,” he said to provide a note of necessary caution. “I mean, who else in the world gets that offload that [Beauden] Barrett got to put Ben Smith in the corner?

“Just when you think, ‘Aw, there is four guys around him, we got him lined up, we can set to defend the next attack,’ but that attack is not finished and Ben Smith is in the corner.

That 60-0 defeat in 2012 (pre-Schmidt) cannot be deleted from the system. A week previously the 22-19 result only occurred after a last-ditch Dan Carter drop goal.

“It’s almost that double-jeopardy,” Schmidt concluded. “They might have seen something in us, and we saw it in ourselves so we try to repair that. We see something in them and suddenly it is not the same picture because they have done a bit of work on it as well.

“As I mentioned before, the quality of their coaching staff means that they won’t allow us too many different access points after last time.”

From other New Zealanders Schmidt learned these methods. Rugby is part of their DNA, so they tell us, so Schmidt tells us.

Or maybe none of this is real.