Gerry Thornley: Munster kicking themselves after talent slips through fingers 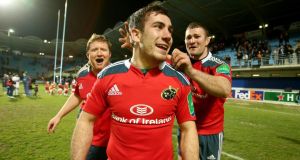 There’s something that sticks in the craw about JJ Hanrahan leaving Munster for Northampton and the English Premiership. It’s not just that he’s a truly rare talent. Damnit, he’s from Currow. He’s a Kerry man, like Mick Galwey before him, and a product of Rockwell College and the Munster academy, who was such a star of the Irish Under-20s that he was nominated for the IRB World Junior Player of the Year in 2012. It shouldn’t have come to this.

Truly talented backs such as Hanrahan don’t exactly fall off trees in Munster. The closest comparison is Staunton, who was 24 when he left for Harlequins and never came back, instead having a nomadic 10-year career in the English Premiership. No disrespect to Ian Keatley, but Munster also had a certain Ronan O’Gara at the time. Staunton’s loss, though regrettable given he could play centre and fullback as well, wasn’t as potentially damaging to his province.

There have been positive moves abroad, but most of those successes came back, be it Eoin Reddan, Mike Ross, Leo Cullen or Shane Jennings. It remains to be seen whether the move works out well for Hanrahan, Northampton and Ireland.

Who knows, he may even return to Munster in two years’ time, either a better player or one who is still short of experience.

At face value, he has swapped one understudy role as an outhalf for another, given Stephen Myler is every bit as established with Northampton after guiding them to the Premiership title last season and top of the table this season. What’s more, it appears even less likely that Myler will be taken away on international duty and, as with Keatley, has signed a new two-year deal.

Apparently he doesn’t have an agent, per se, but is advised partially by Johnny O’Shea, who used to be with Fintan Drury’s Platinum One. It really does make you wonder who is advising Hanrahan, especially as Munster had upped their financial offer to him and put a three-year offer on the table.

According to Munster sources, ultimately it was not a money decision but a rugby one, something O’Gara has also stated.

Their former outhalf says Hanrahan believes he wasn’t going to get a crack at outhalf with Munster in the next season or two. Whatever the merits of this rationale, it was purely a rugby decision, which O’Gara said was “ballsy”.

But it sets a potentially dangerous precedent, and ups the ante every time a young Irish player is nearing the end of his contract. It strengthens the belief abroad, in England now as well as France, that Irish players can be lured from their native province, and with their increased share of the European TV cake, as well as the influx of private benefactors such as Bruce Craig at Bath, the threat from England will become more acute. For all agents with Irish players, Hanrahan’s departure to Northampton is a boon.

Opportunities have been in shorter supply for Hanrahan this season compared to last, with Anthony Foley following Rob Penney in preferring Ian Keatley as his first-choice outhalf.

News first broke of Hanrahan’s possible departure to Northampton in between the back-to-back European Champions Cup games against Clermont.

Hanrahan informed team-mates of his impending move, while the Munster management were also aware of Northampton’s lucrative offer to the player, believed to be in the region of €190,000 per year for two years, according to two Irish Times sources.

Foley had also preferred to keep Hanrahan primarily as a back-up/alternative to Keatley as an outhalf – Hanrahan’s preferred position – rather than do what Matt O’Connor had done in converting Ian Madigan to inside centre, even though the introduction of Hanrahan at inside centre to dovetail with Keatley worked very well in the last quarter of many Munster games last season. It put significantly more pace and width on Munster’s game, as well as providing a more elusive runner in midfield.

Alas, that performance makes his departure even more disappointing. You fervently wish him the best but, again, one wonders who is advising him. gthornley@irishtimes.com