JJ Hanrahan is set to leave Munster for Northampton

The Premiership champions have offered the outhalf a contract worth €190,000 a year 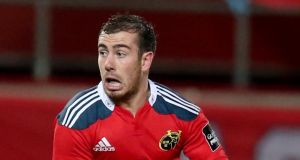 JJ Hanrahan is believed to be frustrated with his lack of progress at Munster. Photograph: INPHO/Dan Sheridan

JJ Hanrahan is on the verge of leaving his native Munster and joining Northampton next season. Currently in the second year of a two-year deal with the province, the 22-year-old from Castleisland has been offered a more lucrative deal by the east midlands club and although the deal has not been completed yet, the odds are he will join the Premiership club.

A former Irish schools and Under-20 outhalf, who was shortlisted for the IRB World Young Player in 2012, after playing a starring role in Ireland’s climb to a fifth placed finish, his professional career has not quite panned out as he would have hoped or certainly liked; especially this season.

Hanrahan was afforded more opportunities last season at outhalf, but this season his face does not appear to have fit, and he has been confined to just two starts at outhalf. Last week, notably, he was an unused sub in the Champions Cup defeat at home to Clermont.

The Kerryman played his schools rugby with Rockwell College and also helped the Munster A side to their 2011-12 British & Irish Cup success, before graduating from the Munster academy in 2013. In the 2012-13 season he made five starts (scoring two tries on his full debut) and six appearances off the bench and last season marked further progress.

Hanrahan also made 17 appearances off the bench, including all eight of Munster’s Heineken Cup matches, and it’s striking to note that on this very week last year Hanrahan was the hero with a wonderful try in overtime which enabled Munster to win away to Perpignan. By contrast, this season he has been restricted to two starts at outhalf, in the games at home to the Scarlets and away to the Blues, with his subsequent two starts against the Dragons and Ulster coming at fullback.

While the province were recently able to announce the resigning of several Irish qualified players – Felix Jones, David Kilcoyne, Stephen Archer and Dave Foley – negotiations with Hanrahan and his representatives have proved trickier.

His first contract would not have been especially lucrative, whereas it is understood that Northampton have offered him a basic salary in the region of £150,000 (€190,000) – which would most probably dwarf any improved offer Munster might make the player.

Despite clear issues with his game management and decision-making, Hanrahan is a rare talent, and the province are understood to be desperately keen to keep him.

Not short of self-belief or ambition, Hanrahan is also, by all accounts, his own man, yet somehow there would be something wrong with a 22-year-old Kerry-born product of Rockwell College and the Munster academy leaving.

Munster sources maintain “the deal is not done yet”, although there is an acknowledgement that Hanrahan is both frustrated with his lack of progress at Munster and has had his head turned by Northampton, which also fuels the rumour that Stephen Myler may be moving on at the end of the season. In any event, the prospect of Hanrahan moving to Northampton looks probable.

According to the Rugby Paper, Wasps are prepared to make Gopperth an offer in the region of €300,000 plus to join them and they remain the favourites to acquire him on foot of Leinster and the IRFU bringing Johnny Sexton home next year on a four-year contract.

Murphy also defended Gopperth, who has come in for criticism since the announcement of Sexton’s return.

“I think, in general, we’re not playing as well in the group. A lot of people are looking in and picking at Jimmy in that scenario. It is definitely not all Jimmy’s fault.

“Everyone has to take responsibility. We are in meetings. Everyone is given the information. It is not an individual issue. It is a team issue. And it is a team solution that we need to find for it.”

Over 38,000 tickets have been sold for Leinster’s rematch with Harlequins at the Aviva next Saturday (kick-off 7.45) and Matt O’Connor’s team probably need to win by more than seven points to come out of these back-to-back matches with a better head-to-head record.

West Ham dispatch Leeds as Champions League dream grows 22:14
Matt Doherty slowly growing into life at Tottenham 21:37
Decision on overseas fans at Olympics expected later this month 20:45
Chelsea’s resurgence continues as they brush past Everton 20:29
Mullins string in fine fettle as they notch up a Leopardstown treble 20:25
Crossword Get access to over 6,000 interactive crosswords