It’s not the end for dropped Springboks star Bryan Habana

Allister Coetzee: ‘He has not just got a role to play on the field, but a massive role off it’ 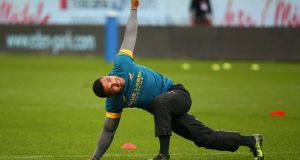 South Africa’s Bryan Habana has lost his place since the defeat to Italy. Photograph: Alessandro Bianchi/Reuters

South Africa head coach Allister Coetzee says it is not the end for Bryan Habana after he dropped the Springboks’ star wing.

Habana, who has won 124 caps, scored 67 Test tries and helped South Africa win the World Cup in 2007, has not made the match-day 23 for Saturday’s Principality Stadium clash against Wales.

Coetzee has reacted to last weekend’s shock defeat against Italy by naming three Test debutants in the starting line-up, while juggernaut flanker Willem Alberts is sidelined because of injury.

Asked about 33-year-old Habana’s immediate Test future at a press conference in Cardiff, Coetzee said: “I would not go as far as saying it is the end for him.

“He has not just got a role to play on the field, but a massive role off it for South African rugby.

“What he has been doing this week is mentor Jamba Ulengo and share his knowledge and experience.

“I sat with him (Habana) at the beginning of the season and talked about the role I wanted him to play in the Rugby Championship and the European tour. Obviously, we now have to review that.”

South Africa went down 20-18 against Conor O’Shea-coached Italy, which was their seventh defeat of 2016, although the Springboks’ record at Wales’ expense shows 28 wins from 31 encounters.

“It has been a tough year, and no different this week,” Coetzee added.

“The toughest part is dealing with the emotions of people, players and the management team. We know South Africans are hurting back home and are disappointed in the team.

“I have learnt so much about myself and people around me, and this is where I see the positive. Rugby is rock bottom at the moment, and there can only be one way — up.

“We have started the process already, and I am really positive about the future. I back this young team fully, and I will be really pleased if they give their all and leave nothing out there.

“Wales have a lot to prove, and we have a new side full of energy.

“Of course we will see mistakes, but the message this week has been simplicity, and if they make a mistake with 100 per cent effort, I will be happy and still be proud of them.

“This season has been the lowest of the lows, and we have to put it behind us to perform better this weekend. I can see there is intent after the disappointment of losing to Italy.

“On Monday, players were hurting, it was very morbid. We had the day off, busy with psychological repair. There were a number of one-on-ones and a lot of chat.”