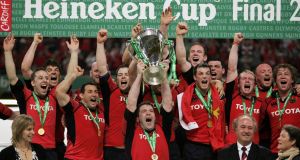 Twenty four hours on and the sense of shock remains profound. Reading all the heartfelt tributes on this site and elsewhere, looking at all the pictures of Anthony Foley in various guises, be it in Irish, Munster, Shannon or St Munchin’s jerseys, as coach and then player, as family man and friend, the sense of loss is no less.

First and foremost, this is a tragedy for the wonderful Foley family. In Billy Keane’s poignant and personalised piece in the Irish Independent, he crystallised how Foley’s family came first, and then there was rugby, and of course the two were inextricably linked.

That the Foleys are such good, warm, embracing people only adds to the utter unfairness of his passing at such a young age. Their needs now come first. And there is also a need for the extended Munster and Irish family to pay their respects.

To even look ahead to a rugby match seems crassly insensitive, and it would be entirely understandable if Munster were also unable to play Glasgow in their next scheduled European Champions Cup tie on Saturday at the Thomond Park ground that Foley, in tandem with his fellow golden generation, made into a citadel. In the coming days, Thomond Park will rightly remain a shrine now more than a rugby ground.

Until such time as funeral arrangements are made, that will remain the case, and even then, were the funeral held on, say, Friday morning, it’s hard to see how Munster, as a playing squad, management and organisation, would be in any emotionally fit state to host a game on Saturday. After all, Foley played with and/or helped nurture every player in the squad.

Munster will put the Foley family first, and everyone outside the province will give Munster as much time and room as they need before deciding when and where they return to a rugby pitch.

Frankly, it would also be understandable were Munster to pull out of the competition altogether. Of course, it won’t come to that, and although it sounds trite to say so, Foley himself wouldn’t want that. At some point, the game will go on, and Munster fans will want to pack Thomond Park to the rafters as a mark of respect for the man and to celebrate his stellar career.

When that comes to pass, it would perhaps be most fitting if it were in the competition Foley graced so magnificently from 1995 to 2008 and at his home ground. No one did more to build Munster’s European odyssey from the bottom up than Foley. He played in their first 71 games, and in 86 overall, and withstood heartbreak after heartbreak. From 1996-97 onwards, Foley scored tries in every European campaign for the next decade.

He was there for their very first foray, when beating Swansea at Thomond Park to begin the long proud unbeaten record at their Limerick bearpit which would endure until Leicester won the final pool game of the 2006-07 season – Foley’s only defeat in the competition there.

He was there for the march to the Twickenham final of 2000 when beaten 9-8 by Northampton, and along with the Shannon core which had helped the club win four successive AIL titles from 1995 to 1998 (when he was also an ever-present in those 48 games) kept coming back.

When then beaten by Toulouse by a point in the 2003 semi-finals, they came back again. After their epic semi-final defeat to Wasps at Lansdowne Road in 2004, they came again the next season. And so they did again after Biarritz beat them in the 2004-05 semi-finals in San Sebastien.

In the week of their quarter-final against Perpignan, the squad were united in grief too after attending the funeral of their young team-mate Conrad O’Sullivan. They rolled up their sleeves and won a torrid battle with the French by 19-10.

They were underdogs when facing Leinster in the semi-finals before their army of fans turned Lansdowne Road red, and then finally reached their Holy Grail with Foley, fittingly, lifting the trophy having refused to touch it the day before at the pre-match photo call alongside his Biarritz counterpart, Thomas Lièvremont.

They’ve been down and out, and written off, so many times, but they kept coming back. Even last season, under Foley’s watch, he and they held their nerve in their final two games in Cork and Limerick to record bonus point wins and secure sixth place in the Pro12 and with it qualification for this season’s European Champions Cup. In the end, it was no mean achievement and it is why Munster were in Paris last Sunday and Glasgow are due to come to Thomond Park this Saturday.

This has been their most heartbreaking loss for sure. But Anthony Foley’s legacy will live on forever. gthornley@irishtimes.com