Isa Nacewa to rejoin Leinster on a one-year contract 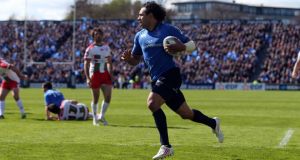 Isa Nacewa: scores a try against Biarritz in the Amlin Challenge Cup semi-final. In total, he scored 24 tries for Leinster in his first stint with the province. Photo: Dan Sheridan/Inpho

Nacewa has been part of the management team with his former employers, the Auckland Blues, since returning to New Zealand two seasons ago.

Having retired at just 30 years of age, he has apparently missed playing. The player had been linked with a player-coach role at Leinster, but it seems as if his role will be strictly as a player.

It is something of a gamble by both player and province, but the risk is reduced by it being just a one-year deal. Clearly, if Nacewa regains anything like his former powers, both parties would look to extend his return.

Yet Nacewa was also a hugely popular teammate within the Leinster set-up as well, for his unstinting professionalism, remarkable consistency and all-round ability – Jamie Heaslip for one describing him as the best player he ever played with.

Brilliant at full-back and equally effective on the wing, Nacewa was also a very useful goal-kicker for the province, outstanding in the air and a hugely physical tackler. His versatility, professionalism and leadership credentials also ensured his value for money. Having still played 19 games in that interrupted first season, Nacewa never played less than 24 matches in each of his last four seasons with the province.

Capped once by Fiji at the 2007 World Cup, which prevented him from becoming an All Black, Nacewa joined Leinster in 2008 and in five seasons with the province played 126 games at outhalf, wing and full-back, scoring 390 points including 24 tries.

His signing signalled a new level of ambition by Leinster, and despite suffering a broken hand in his third game at home to the Ospreys, he returned to play a huge role in Leinster finally becoming Heineken Cup champions.

Nacewa was also an integral part of Leinster’s back-to-back Heineken Cup triumphs in 2011 and 2012, starting all but one of those 18 Cup ties, and after being part of three beaten finalists in the League, his time with Leinster was completed with the Challenge Cup-League double in 2013.

It appeared the crowd were bidding goodbye following the League final win over Ulster at the RDS in May 2013. It would appear it was merely adieu.