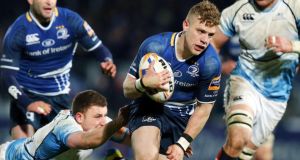 “Tell me and I’ll forget; show me and I may remember; involve me and I’ll understand.” This Chinese proverb has exercised my thoughts regarding Ian Madigan and Paddy Jackson. On the short journey from graduand to graduate last Saturday I was sucked in by DCU Chancellor Dr Martin McAleese, who described the three building blocks of education: encouragement, opportunity and friendship.

With five Irish caps and 107 provincial appearances between them, Madigan and Jackson have achieved hugely and are still gaining opportunities. But without the right encouragement they could falter.

Opportunity has been thrust upon Jackson; Heineken Cup Final 2012 in Twickenham, first cap in Edinburgh. Conversely, Madigan’s opportunities have occurred through greater encouragement and control, such as his place-kicking to maximise his overall growth and potential.

With this in mind, I looked very closely at Madigan, who entertained Glasgow (and us) last weekend in a table-top clash which was far from a pre-season run-out, giving credibility to his performance.

Into the wind, his kicking was technical, punchy and cutting through the air to eke out yards. His first two kick-offs were long and flat, erring on the side of field position, but his third, after Duncan Weir’s penalty on 18 minutes, was a beauty of hang-time and accuracy, hitting the Glasgow 10-metre line, with Isa Nacewa fielding.

Real precision
This was marvellous skill from Nacewa but real precision from Madigan, in that wind.

Defensively, he’s quick off the line, hunting for the hit. Not the biggest man, he gets a great foot plant and drives his shoulder into contact in a coordinated foot placement, shoulder hit and swinging arm; very good technique.

Interestingly, Leinster’s pack is very comfortable, agile and hungry to fill the defensive field. This pushes Madigan much further outfield in multiphase defence, away from the 10 channel heavy defence.

That said, he made five hits in the first half and I counted 11 in total, mostly on big men, and shirked none.

When I first studied him at 10, against Francois Trinh-Duc and Montpellier back in January 2012, although winning easily, I questioned his game management. Since, he has developed variety on his depth.

With slow ball, he gives himself more space but on quick ball, he is lightning to the gain line. Crucially, his team-mates are comfortable with this constant ebb and flow and react accordingly, as D’Arcy did brilliantly with his decoy line against Glasgow, resulting in Madigan’s match-winning try.

D’Arcy has been hugely beneficial in Madigan’s rise.

Leinster’s reliance on building phases with pods gives Madigan a “break” to assess the situation. This requires his team-mates to know what they are doing. How would this work at Ireland level?

In the absence of Jonathan Sexton, Madigan is a player who creates events where Jackson facilitates. Which does Ireland require?

The answer, of course, is multiplex. On 36 minutes, Madigan carried off Isaac Boss, going deep inside Glasgow, before unfortunately offloading to their winger Tommy Seymour. I’d take that!

Later he made a beautiful half-break outside lumbering Tom Ryder before offloading to D’Arcy. He did this by attacking the line on a secondrow. I’d take that!

Mighty run
However, moments later the Leinster breakdown was on Glasgow’s line with him miles back at zero. He selfishly pinned his ears back into heavy traffic, hungry for the try. Then came his mighty run, covering 60 metres, where his initial pass off a Leinster scrum was poor, with D’Arcy decoying to Eoin O’Malley and the ball bobbled; not so good, but he recovered brilliantly and off he went, I’d take that.

As he ran out of yards he didn’t get Seán Cronin into the game, why did he ignore him?

He is clearly comfortable in control and is stuck in everything; suiting Leinster’s style. But getting stuck in has its disadvantages, especially as a 10, tactically and kicking-wise.

A lovely break by Nikola Matawalu got Glasgow across the Leinster 22, where Madigan completed his ninth tackle. With the troops filling in, Madigan stood up, gesticulating to referee Nigel Owens.

Shane Jennings, totally focused, was oblivious to Madigan until he spotted him and unceremoniously ejected him from the ruck; great leadership from Jennings and a reminder to Madigan where he shouldn’t be.

Under pressure, he is comfortable in traffic and will get to ground with a good ball placement. This happens where he gets caught between the ideal positions off rucks.

Three times Glasgow got very close to a block down, which brings his kicking depth decision into focus.

Off the cuff
This occurred inside his 22, with Glasgow forcing him down the blindside and his rushed Garryowen was returned with ease for Glasgow’s second try. Yes, Leinster missed tackles but the kick didn’t have to be so off the cuff.

There is no doubt his skill set, ambition and enthusiasm are assets for any team. His challenge will be control of tempo, conditions and team assets, while oscillating between his love of strike running and his role as outhalf, especially in tight European and Irish games.

What a package he’ll be. His chip inside his dead ball area prevented a potential five-metre scrum to Glasgow was playing the odds uncomfortably like David Campese but what a pop up to Cronin!

Campo, however, was a winger and Ireland might want more security, but, I say, don’t be afraid to go out on a limb as that’s where the fruit is.
PS. My opposing open sides are quickly becoming extinct as another passes into the good night; best of luck Johnny Concrete.