Ireland getting better at being favourites, but France have more scope to improve

Ireland are less gifted than the class of 2007, but they may enjoy a better World Cup 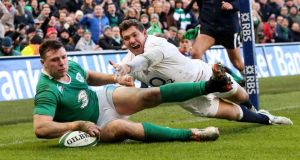 Robbie Henshaw scored the season-defining try with a high take and adroit touchdown off Conor Murray’s box kick against England. And, with that, a new Irish midfield star was born. Photo: David Rogers/Getty Images

It’s been interesting and, let’s be honest, at times it’s been dull too. Much of the rugby has been ho-hum, and the provinces had a decidedly mixed bag without any reward, but any season that features an Irish Six Nations title win, and a retention of the championship for the first time since the late 1990s has to be considered a cracking one.

For Ireland to win back-to-back Six Nations titles ensures they will go into the World Cup with a better body of work under their belts than at any of the previous six tournaments, superior even to the runners-up of the 2007 Six Nations who also briefly rose to the giddy heights of third in the world. Of course, we all know what happened next.

By no stretch of the imagination could this team or squad of players be said to have more ability than the class of 2007. Admittedly, they were more of a team than a squad, but, even so, that team contained a bunch of players at the supposed peak of their careers. Ideally for a World Cup, most of the so-called Untouchables were in their mid to late 20s and had 50 caps to their names.

That they failed so spectacularly should be a warning in advance of the 2015 World Cup. True, they had a tough draw, and lost out in the pool stages to two eventual semi-finalists, France and Argentina, but they were well beaten by them and barely squeezed past Namibia and Georgia.

It’s hard to believe that Schmidt, Les Kiss, Simon Easterby and co have more talent to work with than, say France, or Wales for that matter, and possibly even England, who certainly have more strength in depth. It’s as much a credit to Ireland’s organisation, efficiency (one thinks of their peerless success ratio in retaining possession at the breakdown) and mental strength as anything else.

All this is the product of deep attention to detail from Schmidt, which carries through to every member of the squad, and the squad have trust and belief in their coach and coaches. It’s doubtful that, by comparison, Ireland’s main pool rivals, France, would have the same collective belief. Although they will finally turn to Guy Novès after the World Cup, it’s hard not to agree with Pierre Berbizier that France have missed a trick and that the past four years have been wasted.

Yet Ireland are maximising their potential, and, even so, the margins have been small, both in most of their wins and ultimately in retaining the title by a score. So they must continue to get the best out of themselves, whereas you’d have to think France have way more scope for improvement, and furthermore, in the context of a World Cup, with preparation unfettered by the demands of their Top 14, they are more likely to perform in an early-season World Cup window than in a Six Nations or an end-of-season summer tour.

France are also the more proven World Cup performers, having reached three finals in various stages of mutiny, whereas Ireland have never moved beyond the quarter-finals. That counts as baggage.

In the midst of the mostly ho-hum rugby, there was, admittedly, a Super Saturday that more than lived up to its billing. The greatest climax that the world’s oldest tournament has ever known demonstrated how the mind can be a funny thing, all the more so if players are liberated to have a go.

And disappointing as the defeat to Wales was, Ireland will probably learn more, and benefit more, from that defeat than the four wins. Besides which, if Ireland hadn’t lost that game then we could never have had the unforgettable climax to the tournament seven days later.

Perhaps there was a post-Brian O’Driscoll hangover, all the more so after his remarkable valedictory campaign. In his absence, and that of Gordon D’Arcy, the void was filled by Robbie Henshaw and Jared Payne, and it was fitting on several levels that .

They still have some way to go to emulate Peter Stringer and Ronan O’Gara, and will probably never accumulate the same number of caps, but they have the ability to become Ireland’s best-ever half-back combination.