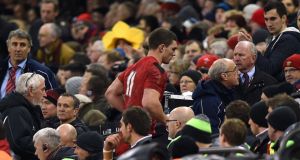 Wales winger George North should not have remained on the field of play following a head impact in the 61st minute of the Wales versus England RBS Six Nations match, World Rugby has announced in a statement. Photograph: Joe Giddens/PA

World Rugby has said Wales winger George North should not have remained on the field after a clash of heads with team-mate Richard Hibbard but it accepts the Welsh Rugby Union’s explanation surrounding the incident.

North appeared to suffer a momentary loss of consciousness after the 61st-minute collision with Hibbard in the RBS Six Nations opener against England four days ago.

The WRU’s national medical manager Prav Mathema said on Monday night that had the second incident been seen by medics, then North would have been immediately taken off and replaced.

North came off the field in the first half after receiving an accidental boot to the head from England lock Dave Attwood but was able to continue after treatment.

World Rugby, meanwhile, has also announced that it will be “immediately investigating, evaluating and promoting the implementation” of new measures.

These are the practicality of television match official technology being expanded to identify head injuries as they happen on the field, all elite competitions being requested to provide pitchside video for medical staff, and all elite tournaments encouraged to adopt the Rugby World Cup 2015 player welfare standards.

In a statement, World Rugby said: “Following a full post-incident review, World Rugby believes that Wales player George North should not have remained on the field of play following a head impact in the 61st minute of the Wales versus England RBS Six Nations match at the Millennium Stadium on Friday night.

“The World Rugby head injury protocol clearly states that a player should be immediately and permanently removed from the field of play where there are any visible symptoms or suspicion of a potential concussion.

“However, following thorough discussions and input from the expert independent Concussion Advisory Group, World Rugby accepts the WRU’s explanation that neither the team medical staff nor the independent doctor had sight of the incident, and understands that the medics acted within the framework of information they had at the time and would have taken a different course of action had they had direct pitchside visibility or access to the same broadcast footage seen by those watching on television.

“The impact was the second sustained by the player in the match, following a first half temporary removal for a head injury assessment.

“Having reviewed the incident report, World Rugby can confirm that the WRU followed correct protocols when assessing North following this first incident.

“The WRU has outlined that the player continues to undergo close medical supervision and is undertaking supervised graduated return to play protocols.

“Player welfare is World Rugby’s number-one priority, and the incident highlights the importance of ensuring that medical staff are given the best-possible level of support to minimise the chance of a repeat incident and further enhance the protection and support of players.”

World Rugby added that independent medics and video review are an important feature of the the 2015 World Cup player welfare standards, which will operate at all 48 tournament games in England and Wales next September and October.

“It is World Rugby’s intention that these standards are implemented universally.

“World Rugby would like to thank the WRU for its full co-operation, and welcomes the proposed initiatives by the union to strengthen further the ability to correctly identify head impacts on the field of play.”

Mathema told WRU TV that Wales’ medical staff would have access to instant video replays during the rest of this season’s Six Nations tournament in games against Scotland, France, Ireland and Italy.

Reflecting on the second North incident, Mathema said: “Regrettably, we didn’t get a chance to see the incident, and had I been given that opportunity, there is no doubt he would have been removed from the field of play.

“There are no pitchside replays available currently, and the independent match-day doctor was unable also to aid us in that process.

“We, unfortunately didn’t see it, but having seen it since, obviously, there is no doubt it looks like he has a momentary loss of consciousness, and in that case he should definitely be removed from the field of play.

“Since the incident, we have seen where our protocols need to improve.

“For the next four games of the Six Nations, we are certainly going to have instant video replays for home and away matches. Pitchside practitioners sometimes will need help.

“There are the rare occasions, like the one on Friday night, when sometimes things are unsighted. Where possible, we need to enhance these protocols, which is certainly something we are looking to do in the immediate term.

“Concussion is a really important injury that we at the WRU take incredibly seriously.

“We want to make sure people understand and recognise the need to remove concussed players, and make sure the message is delivered not just here in Wales, but globally.”

Northampton star North has started return to play protocols. Wales resume their Six Nations campaign against Scotland at Murrayfield next Sunday, with head coach Warren Gatland due to name his starting line-up on Wednesday.

Mathema added: “George, since the incident on Friday, has been symptom-free the whole time.

“Post-match he was symptom-free, and has also been evaluated and he has shown no signs and symptoms of any concussion.

“Because of that he has actually started his return to play protocal already, and there has been no issue with the first stages of that.

“George will go through a step-by-step process of increasing his cognitive and his physical activity through the week.

“He will be assessed every single day by a doctor, and he will also get a neurological opinion before we make a decision whether or not he is fit to return to play.”

Seán Moran: What nostalgia tells us about how the GAA sees itself 06:20
Six Nations rugby needs to be protected for terrestrial TV 06:00
My favourite sporting moment: Game, set and couch as Borg takes down McEnroe 06:28
Dr Claire Molloy: ‘It is a privileged place to be, on the frontline’ 06:21
Garry Ringrose to stay with Leinster as he signs two-year central contract 06:23
Here is your handy guide to sport on television this week