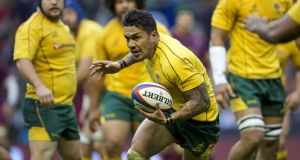 Wallabies winger Digby Ioane is a doubt for the first test against the British and Irish Lions after undergoing a knee operation today.

The New Zealand-born 27-year-old has scored 11 tries in 34 tests since his debut against Wales in Brisbane in 2007 and would have been an almost certain starter against the Lions.

Ioane injured the joint in the Queensland Reds’ loss to South Africa’s Cheetahs in Super Rugby last weekend and is now “touch and go” for the June 22nd test in Brisbane, according to a tweet from Australian Rugby Union (ARU). “@digbyioane underwent operation this morning on the articular cartilage in his left knee,” it read.

Left winger Ioane is a potent threat in open play with his powerful high-stepping running style often helping him barge through and past tacklers.

Instantly recognisable for his distinctive hairstyles and much-tattooed torso, he is destined for Stade Francais at the end of year.

Coach Robbie Deans named him in his preliminary 25-man squad for the series last Sunday, the most experienced of three specialist wingers alongside Nick Cummins and Joe Tomane.

The versatility of Australia’s backline players means Adam Ashley-Cooper and James O’Connor are also options on the wing, while Deans has noted that uncapped fullback Israel Folau has played out wide in rugby league internationals.

Openside flanker David Pocock (knee) and hooker Tatafu Polota-Nau (broken arm) have both been ruled out of the Lions series while George Smith, another openside, is a serious doubt because of knee injury.

Deans will add six more players to his squad on June 11th.