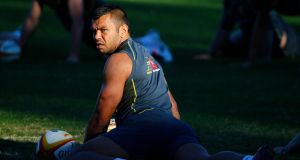 Wallabies back Kurtley Beale has been suspended pending a probe into “deeply offensive” text messages he allegedly sent earlier this year. Beale was already facing disciplinary charges over a bust-up with Di Patston on a flight from South Africa to Argentina for a Rugby Championship test last week. Photograph: David Gray/Reuters

The Wallabies team official at the centre of the Kurtley Beale row, team business manager Di Patston, has quit her job because of “stress relating to recent events”, the Australian Rugby Union (ARU) said on Saturday.

Utility back Beale was suspended on Thursday pending a hearing into allegations he distributed “deeply offensive” text messages about Patston in June.

That move came while the ARU was considering disciplinary action against Beale after his mid-air slanging match with Patston as the Wallabies travelled from South Africa to Argentina for their final Rugby Championship test.

According to local media reports, the row was sparked by Patston’s request that Beale change his shirt but the controversy became a touchstone for concerns about her role and her relationship with coach Ewen McKenzie.

In an extraordinary news conference on Friday, McKenzie was forced to deny he was involved in an intimate relationship with Patston, who he brought with him to the ARU from the Queensland Rugby Union.

The “Code of Conduct Tribunal” into Beale’s conduct would continue despite Patston’s departure, ARU chief Bill Pulver said, with the hearing likely to take place after the Bledisloe Cup test against New Zealand in Brisbane next week.

“We maintain the text messages and images were of such an offensive nature that they deserve to be fully and independently investigated, and Kurtley deserves an opportunity to present his position,” Pulver said.

“We are responding in a way that any organisation should by taking this matter seriously.

“We have a legal and moral obligation in this matter, and we need to ensure the values of our game are upheld. I don’t apologise for that.”

Pulver added that the ARU would review the support structure around the Wallabies squad and put any necessary changes in place before November’s tour of Europe.

Australia lost their last two matches of the Rugby Championship to South Africa and Argentina and have dropped to fourth in the world rankings as a consequence.

McKenzie still has the backing of Pulver and the ARU board but a big defeat to the world champions next weekend could put him under considerable pressure with less than a year to go before the World Cup.

“I have complete faith in our players that they will be focusing on the opportunity to play the number one team in the world next weekend,” said Pulver.

“There’s no denying we are the underdogs going into this match, but we have a head coach and team who will come together and work to achieve what some may think is mission impossible.”