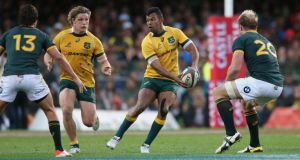 Utility back Kurtley Beale has been dumped for the Wallabies’ final Rugby Championship match against Argentina after an in-flight row with a member of team management that triggered an internal investigation.

Beale, who has been on the bench in recent games, was left out of the matchday 23 altogether after the Australian Rugby Union confirmed their probe into the incident which occurred in transit from South Africa to Argentina.

McKenzie stocked the bench with six forwards, with scrumhalf Nic White and winger Rob Horne preferred to Beale as the only two replacement backs.

“We recognise the need to have enough strike-power in the forwards to get us through the back-end of the game, especially after such a physical encounter against South Africa followed by a difficult period of travel,” McKenzie said in a statement yesterday.

“That only leaves two spots for the backs, and we believe in this instance the combination of Nic White and Rob Horne will provide us with the best balance given the physicality we expect in this match.”

Beale opened the tournament as starting outhalf against champions New Zealand, but was demoted to the bench after two matches and was unable to prevent the Wallabies from crumbling late against South Africa in Cape Town last week.

In two changes to the starting side, former captain James Horwill replaces concussed lock Rob Simmons, while Scott Higginbotham comes in as expected for the injured Ben McCalman at number eight.

“Rob plays a significant role in the team as our chief lineout caller, so it’s disappointing to lose him, but we’re confident in the abilities of James and are looking forward to seeing him step up in this area,” McKenzie said. “Scott has been working hard and looking for an opportunity in the starting side for some time. With the injury to Ben, he now gets his chance.

The ARU probe has thrown the spotlight back on Beale, who has a patchy off-field record and spent time in rehab last year for alcohol issues.

McKenzie told Australian media that the incident had distracted the team’s preparations and the staff member had flown home early. The ARU said it expected to wrap up the probe within a week.

5 Gerry Thornley: Maybe the new Ireland could do with a little of the old detail