Wales insist Northampton must do without George North for Bath clash 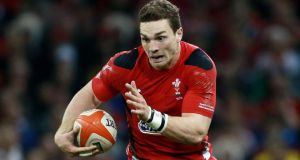 George North: Wales want him to continue to prepare for the game against France in Paris. Photo: David Davies/PA

North has recovered from the concussion he suffered in the opening round of the Six Nations against England in Cardiff, and Saints had hoped he would be available for the match between the top two in the Premiership.

But under the terms of his contract, for which the Saints were fined and warned last season by Premiership Rugby for flouting its policy of not having release provisions for players who are not English, Wales have first call.

All Wales’s other England-based players are back at their clubs this weekend, but Wales want North, who was rested against Scotland at Murrayfield, to continue to make a graduated return before their match against France in Paris next Saturday.

“George is fully recovered but the terms of his contract with Northampton give him full release for Wales and he is staying with us,” said Wales attack coach Rob Howley.

“Northampton talked about having an opportunity to play George but we feel we need to keep him with us. He could only have played against Bath if we had agreed to release him.”

The person who owned the phone angrily accosted Cuthbert, who is heard to reply: “It’s gone mate. What are you going to do?” The player, who was part of the 2013 Lions squad in Australia, was not in camp with Wales at the time.

“We are aware of the video,” Howley said. “We are going to speak to Alex about the incident which occurred when he was not on Wales duty. This is a constant reminder to us all and we always tell the players about their conduct in public.”

North’s return to fitness, Cuthbert’s behaviour and the form shown by Liam Williams, who played on the wing against Scotland, will give the Wales management their most lengthy debate in selection for the France game.

Howley said: “Liam played particularly well at the weekend, he has the ability to beat a player and his work-rate off the ball was very good. It will be a huge selection.”

He defended Wales’s style of play after one of the best players to wear the red jersey, Gerald Davies, bemoaned the side’s lack of width, saying emphasis should be placed on getting the ball to the wings and into space rather than telling them to come infield and into heavy traffic looking for it.

“I spent many nights talking to Gerald on Lions tours and would welcome a chat with him,” Howley said. “He is someone who understands the game and we are comfortable with our width in attack off first-phase. You always want more line-breaks and tries . . .”

England outhalf Danny Cipriani has signed a new two-year contract with Sale Sharks. Cipriani had been considering a lucrative offer to join the European champions Toulon but the 27-year-old has committed his future to the Premiership club.

He had begun talks with Sale about an extended contract before Christmas, and said: “I am delighted to have put pen to paper at last and signed the new deal. It’s a quality set-up and the future looks great at the club with some exciting times ahead.

“It’s also an environment that makes you feel very welcome . . . .”

Cipriani’s decision to shun a move to France comes as he seeks to secure a place in England’s World Cup squad. Guardian Service

1 Stephen Kenny replaces Mick McCarthy as Ireland manager
2 Matt Williams: The economic earthquake for European rugby is coming
3 Simon Zebo: ‘It’s been tough not being able to put my hand up to play with Ireland’
4 Pat Critchley: ‘You teach or coach the person first and the subject or the game second’
5 Understated Stephen Kenny offers Ireland a ray of light
Real news has value SUBSCRIBE