Wales have hope but All Blacks still look the real McCaw 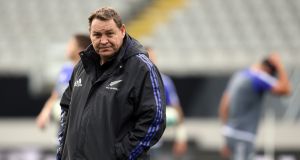 New Zealand may be starting life without a legion of centurions, but they still look the real McCaw. Those hoping, starting with Wales in Auckland on Saturday, that the World Cup holders will suddenly become mortal, based on the loss of leaders rather than talent, should be aware that down the years the All Blacks have managed transition better than anyone.

Richie McCaw and Tony Woodcock may have retired and Dan Carter, Ma’a Nonu and Conrad Smith may have become supporters of the Euro, but it is not as if the New Zealand head coach Steve Hansen has not prepared for the day when he will have craters to fill. Of the six changes to face Wales from the side that defeated Australia in last October’s World Cup final, four players were involved in the tournament and a fifth, Aaron Cruden, missed out because of injury.

There are two uncapped players on the bench, including Ardie Savea, the brother of the All Blacks wing Julian Savea whose performances for the Hurricanes in Super Rugby this year made him a contender to oust Sam Cane as McCaw’s replacement at open-side flanker, and it is there that the loss of so many caps may be felt if the game against Wales is tight, as it was in Cardiff in 2014 with 10 minutes to go. Wales led 16-15 after 69 minutes that night only for New Zealand’s replacements, who included the centre Ryan Crotty, who partners Malakai Fekitoa in the midfield for the first time in a Test since the 2014 Rugby Championship when he came as a substitute, to inspire a 19-point salvo without reply.

The Welsh believe that if they are in the game as it enters the home straight, mindful that the All Blacks have not played together for more than seven months and that the first of the three Tests represents their best chance of a first victory over New Zealand since 1953, they have the players in reserve to make the difference.

Which may explain the first Test venue. New Zealand have not lost at Eden Park in their professional era and have won their past 34 internationals there, including the 2011 World Cup final. Wales’s previous four appearances at the ground have ended in defeat, two to the All Blacks and two in the World Cup five years ago, to France in the semi-final and to Australia in the play-off. They have never won in New Zealand but their starting lineup shares 764 caps, boosted by the return of the prop Gethin Jenkins who will play in his 125th Test, compared to New Zealand’s 580.

Hansen said this week that Wales were a “good side” that did not receive the merited credit, although a run of three victories in their past eight Tests would suggest they have become like a grand hotel of faded glory, in need of a modern decor. The All Blacks know what to expect: a blizzard of balls falling from the sky, hard running and an overtly muscular approach.

Wales have toyed since the World Cup with a more fluid game only for skills to melt in the heat of the moment. They need to put pressure on New Zealand and maintain it, accurate kicking followed by a committed chase. Mistakes against New Zealand are invariably costly and never more so at Eden Park. They may have been awful at Twickenham two weeks ago, but they will have noted in the past week how England came close to winning the first Test in New Zealand two years ago despite having to field a weakened side because of the Premiership final.

New Zealand found a way to win that day, as is their habit. The one question after the loss of players who sustained the All Blacks for a decade or more is how they will react under pressure when a match appears to be going against them: think McCaw’s inspired lineout call to win the game in South Africa last year after they had been on the defensive for most of the previous 70 minutes.

There was never a sense of panic and there has not been in the All Blacks since they lost the 2007 World Cup quarter-final to France in Cardiff. They quickly got back to the top of the rankings after that tournament and have stayed there since, currently with 96.10 points; no other country is in the 90s and while they have lost leadership and experience that would considerably undermine others, the way the system works there is that ready-mades are produced for the international game. Wales will need to be at their best, and more.

1 Inside the world’s largest sports air dome just outside Knock
2 Worst sporting moment: White knuckle ride on a hate-filled night at Windsor
3 As ever, Ronnie O’Sullivan sparks debate at the Crucible
4 ‘Embarrassment, anger, sadness’: the decline of the great Stephen Hendry
5 Matt Williams: Players’ sacrifice must outweigh the rest of society
Real news has value SUBSCRIBE