If the Irish pack are the same soft proposition in tomorrow’s game, they will be torn apart 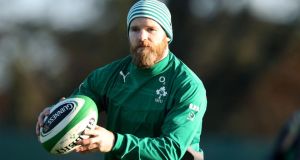 Gordon D’Arcy is greatly underestimated in Irish rugby. It is only when he is absent that people see his real value. Photo: Dan Sheridan/Inpho

Approaching the summit of Mount Everest, Edmund Hillary, the great New Zealand mountaineer, famously confronted a staggering challenge. An impassable rock overhang blocked the path. The rock jutted out of the mountain, forcing any climber who wished to pass to climb and hang by their fingers, over a deadly abyss. No human had ever seen this barrier before.

It is legend that Hillary used his brilliant technical climbing skills to defy death and overcome what seemed impossible. He literally jumped off Mount Everest. He grabbed hold of the rock face above his head and climbed over the yawning drop.

The section of Mount Everest is named “The Hillary Step”. It was as much a leap of courage as it was a physical jump. Hillary discovered that, “When you look into the abyss, the abyss also looks into you”.

The abyss looked into Hillary and it ignited his magnificent spirit.

Rarely in the life of a rugby player does the opportunity arise to look into a sporting “abyss” – to meet a challenge of such huge proportions, that the world gives you no chance of success.

Tomorrow, Ireland have such a chance. As the abyss glares coldly back into their soul, the imminent defeat must spark fight in the men in green. The greatest enemy must be the ultimate motivation.

Sparkling diamond
To an athlete these days are wonderful gifts. In rugby terms, the New Zealand national XV are “the abyss”.

When you play them, you face the statistical probability of a thumping. They are the best team on the planet, playing magical rugby. They are ferociously proud competitors. The actions of the throat -slitting haka symbolise how they play. They are ruthless.

Their play is violently confronting. Remember Tana Umaga taking out Brian O’Driscoll. That’s how they roll in New Zealand.

To defeat the monster that is New Zealand you have to be as ruthless, as driven, and as physically confrontational as them. Don’t take a knife to a gun fight. Over more than a century, as a rugby nation, Ireland have been intimidated by the Kiwis. I hope it stops tomorrow, but I doubt it.

Added to that history, last week Ireland were as poor as I have seen them.

The performance of the forwards was below acceptable standards. At scrum time the locks forgot their responsibility to their front row. Watching a seven-man Australian pack explode an Irish scrum tells you more about Irish attitudes than technique.

Australia had 10 players in the lineout before the driving maul that led to an embarrassing try. Ireland should not have been taken by surprise that a maul was coming. Unbelievably, the desperation and technique required to stop the Wallaby maul was not evident.

Ireland need Devin Toner to succeed. Last week in every aspect of his performance he was below standard. I hope Big Dev proves me wrong. I want to be wrong, but Ireland cannot take another error-ridden, gentlemanly performance.

His mentor Brad Thorn would have been unimpressed. The secondrow must deliver the power to the team and Dev must step up.

Harry Potter
If the Irish eight carry the same soft attitude into tomorrow’s match, they will be torn apart.

Luke Marshall is a good young player who will grow into an excellent international player, but his decision-making when defending Quade Cooper, sliding across field was poor. The inside centre is the keystone of the backline defensive system. If he fails in his execution the system collapses.

Tomorrow there will be so many black-draped spectres, flying down the first centre channel, it will look like a Harry Potter movie.

Gordon D’Arcy is greatly underestimated by Irish rugby and it really annoys me. It is only when he is absent that people see his real value. He was greatly missed last week. He is not finished and his selection is paramount.

Ireland’s ball runners were ineffectual because they did not hit the ball with pace. Seán O’Brien was gang tackled and neutralised. The Australians may have had hangovers and held their team meeting at Krystle at 3am Wednesday morning, but they had done their homework. So will New Zealand.

The Wallabies attacked Ireland down the flanks. The wide-running Wallaby forwards and some very feeble Irish tackling caused havoc.

Kieran Read must be licking his lips. His wide attack is the best in the world and the almost perfect passing game of the New Zealanders means the ball will get to the flanks exceptionally fast.

Last week was a reality check for Joe Schmidt. His team’s performance lacked passion, they were out-thought, out-enthused, outmuscled and outplayed.

His selections at inside centre and secondrow did not work.

One of his generals, Rob Kearney, made disrespectful comments about the Wallabies in the media. I know and respect Rob. He is a wonderful player and fine young man.

That is why I was so surprised by his words. Players should never criticise the opposition in the media. The quotes made the sporting headlines in Australia and the Wallabies had them up in their team room. Not very clever.

All 101 coaching stuff. International rugby is unforgiving. Welcome to the big time Joe. Right now Ireland are gazing into the abyss . . . and the abyss is all black.