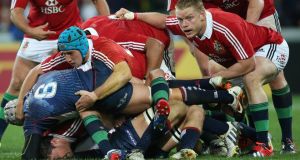 Tom Court has his new favourite number now. It’s 806. It’s his Lions number. Having only arrived last Friday on a family holiday in his native Brisbane, four nights later he was still coming to terms with his new status as a rugby player after coming on as a 55th minute sub alongside Rory Best in a revamped front row. But as interruptions to family holidays go, this wasn’t the worst.

The irony of this latest twist in his unusual rugby career has not been lost on Court.

A calf injury to Alex Corbisiero placed the Englishman’s fitness in doubt – the same Corbisiero at whose hands Court suffered a horrendous mangling when he was pressed into service as a tight-head replacement for Mike Ross in the 30-9 St Patrick’s Day slaughter at Twickenham.

Mount Everest
“Tonight is the peak of Mount Everest, really,” he said, adding: “It’s ironic that Alex Corbisiero was probably heavily involved in my lowest moment in international rugby and has now been heavily responsible for my high point.

“Maybe it’s a bit of justice but it’s one of those things that is going to be hard to believe for a long time to come and I’m just going to enjoy having that red jersey. I think 806 might be my new favourite number.”

By then Court had effectively become a specialist loose-head, proving his worth with Ulster to return to the Irish set-up during this year’s Six Nations, but reflecting on that low point he admitted the possibility of not playing Test rugby again was on his mind.

“It very much was. I think I was on 29 caps at that point and to be honest I didn’t think there’d ever be 30. I think I’m at 32 now, and this obviously tops it all off. Rugby is just a funny old thing I guess. It’s a fickle sport and it’s just one of those things that you have to be robust and you have to be resilient, and just ride it out.

“You take the plaudits with a pinch of salt as well as the criticism and just keep doing your best.”

It was just before the last Lions tour here in 2001 that Court, then a 19-year-old overweight shot-putter, spotted a sign “rugby players wanted” in University of Queensland, becoming a team-mate of Stephen Moore, Drew Mitchell, James Horwill and others.

“It’s very ironic and after the World Cup win over Australia as well, it just keeps coming back, I guess.”

Along with his wife Cath and kids Madeleine and Theo, Court was staying in an apartment on the Gold Coast.

“We had booked in a few weeks down there to give the kids somewhere to enjoy the beach and just relax,” said Court, which also afforded a chance to see both sides of the extended family. “We’re trying to ease the guilt, showing the kids to the grandparents.”

“We had booked on the coast for a bit over a week and then we were actually supposed to be going to Sydney for our seventh wedding anniversary on the 30th and just keeping the relatives happy, and then head home on July 10th.”

Even though it has taken injuries to Cian Healy, Gethin Jenkins and now a third loose-head in Corbisiero, himself a late call-up, for Court to be called up, initially he thought he was the victim of a prank when he received a voicemail from Lions’ operations director, Guy Richardson, on Sunday night.

“I actually had a bit of trouble hearing it. It was only when Mick Kearney, the Irish team manager, called to reconfirm and check what I was up to that it all started to sink in. I guess that was when the nerves started going. The following morning I was in a taxi down to Brisbane to meet the boys.”

There was, he revealed, some issues getting him through security at Brisbane airport for the squad’s flight to Melbourne on Monday, and, having planned on this being a complete break from the game, also admitted: “I didn’t have a scrap with me, to be honest. I had to find contacts, mouth guard, absolutely everything. They [the Lions] did brilliantly considering I only met up with them yesterday morning and they have been unbelievable looking after me.”

Nerve-wracking
His only session had been the captain’s run in AAMI Park on Monday which he described as fun, if a bit nerve-wracking.

“Graham Rowntree had a word with me and said ‘don’t think about it too much, just go out and play’. Yeah, it was just trying to make sure you gave it everything you had d and didn’t let the boys down.”

The initial plan was to have Court employed as a stopgap, ala Shane Williams, but they will await until further assessment of Alex Corbisiero before making a final decision. So you ask him what the highlight of the last couple of days?

“I guess coming off the pitch tonight and actually realising it all happened, and them telling me I’ve now officially got a Lions number.”

Man United’s latest Parisian party more impressive than heist of 2019 09:45
Lions to play Japan on home soil before tour to South Africa 09:26
Tiger Woods in the groove as he plots a path to Augusta 09:22
No underage or minor GAA to be allowed under Level 5 Covid-19 restrictions 08:53
Ole Gunnar Solskjaer hails players after win over PSG 07:57
Crossword Get access to over 6,000 interactive crosswords