Topic of concussion raises its head again after opening weekend 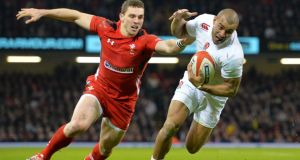 England’s centre Jonathan Joseph evades the tackle of Wales winger George North to score a try during the Six Nations match at the Millennium Stadium in Cardiff. Photograph: Glyn Kirk/AFP

Around and around it goes. Rugby would like to be rid of the issue but concussion has again troubled players over the weekend with at least three Six Nations teams now involved in watch and wait briefs.

For Joe Schmidt, the earliest Rory Best will be allowed to train this week is Thursday. That day is entirely dependent on the Irish hooker passing a series of Head Injury Assessments (HIAs). If he fails one of them, which range from simple memory tests to co-ordinated running and catching, he’s unlikely to play.

With scrumhalf Conor Murray and manager Mick Kearney speaking at the training base in Kildare, the subject was impossible to avoid. Best is suffering from concussion. Murray has just come back from concussion. Johnny Sexton is expected to make a return from concussion and George North, or more particularly Wales, are in the dock over concussion.

Wales tighthead prop Samson Lee was diagnosed with concussion and, like Best, will have to prove his fitness ahead of the trip to Edinburgh. So will outhalf Dan Biggar, who clashed heads with team-mate Gethin Jenkins during Friday’s game. More concussion.

Sexton has not played since late November last but his latest concussion was his fourth in a 12-month period and was a contributory factor in keeping him from action for so long.

Luke Marshall is another player with a concussion profile and Paddy Wallace, now retired, would have too had the word had been used to describe head injury during most of his career.

The IRFU now keep an inventory of injuries but Sexton’s return and the controversy surrounding North’s double head injury and Best’s recovery is keeping the issue burning.

After an accidental blow from the boot of English lock Dave Attwood, North was removed for eight minutes and passed fit to play on. He then collided with team-mate Richard Hibbard and appeared to be knocked out cold. Again he got up and played on.

“Certainly looking at the way the Irish medical team is set up, say a physio on the far side of the pitch and two medics on the near side, I would hope that we wouldn’t miss something like that,” said the Irish manager.

“I know in relation to Rory that the minute he got the knock, the medics went on to him and he was taken off straight away to do the injury assessment, which he failed.

“Then post-game he did another test which he actually came through pretty well, but certainly our medical team would be really, really diligent.

“But in regards to the George North situation, I couldn’t really second guess the Welsh medical team. But I know they are saying they didn’t see the second knock he took, even though it was very obvious, I think, to everybody watching on TV that he was knocked out cold.”

But Murray’s experience also highlights how capricious the injury can be. The scrumhalf, who returned last week to play against Italy, injured a disc playing for Munster against Italian side Zebre on January 10th.

But he was also concussed in the tackle that hurt his neck. Underpinning Dr Barry O’Driscoll’s ongoing objection to the 10-minute injury bin that he calls meaningless, Murray passed the HIAs before the symptoms arose days later.

“Sometimes you do get a delayed concussion,” said Murray talking about his injury last week. “I’m not saying that’s exactly what happened me. I got taken off late in the game, passed all the questions, the balance tests, which meant I was fit to play. They took me off and did the HIA tests in the dressing room before halftime.

Joe Schmidt waits for Best, while Wales’s treatment of North and World Rugby’s questioning of their management of his injury ensures that will be closely monitored. So too will Sexton. His health as much as his abundant talent is sure now to come under scrutiny.