Time for IRB to act as concussion becomes commonplace 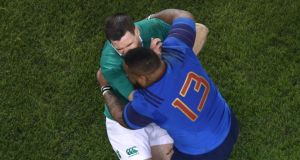 The clash that led to Johnny Sexton and Mathieu Bastareaud ending up in the blood bin at the Aviva Stadium. Photograph: Billy Stickland/Inpho.

Every time rugby is in danger of becoming too one-dimensional the game’s governing body, World Rugby (formerly IRB), have generally devised law changes or adaptations to redress the balance and save the game, often times with the help of former or current players and coaches as well as referees. Well, it’s that time again.

Perhaps the reaction hereabouts is more excessive, given Saturday’s bruiser at the Aviva followed on from the arm wrestle in Rome. In two games Ireland have managed three line breaks (and none against France) while conceding only three. They have scored two tries, both against 14 opponents, and the one clear try-scoring chance they created against France was while Les Bleus were down to 14 men.

France have scored one try in two games, also against 14 men (the only try Ireland have conceded). But please, let’s not hear it for 13-a-side.

There were also nine tries in Twickenham and four in Murrayfield, yet somehow Saturday’s unremittingly physical affair somewhat typified modern rugby, and certainly a heavyweight, modern-day Test match. France, particularly, have adopted a brand of rugby which apes so much of a Top 14 over bloated with overseas players by seeking to bludgeon teams into submission by running through players as opposed to around them.

The build-up, with so much of it generated around Johnny Sexton’s return, was also unhelpful and even a little distasteful. Admittedly, Bernard le Roux assuredly had his tongue firmly resting in his cheek when suggesting his Racing team-mate should wear a helmet, but it still betrayed rugby’s macho mindset when it comes to the vexed issues of head injuries.

The same could be said of Philippe Saint-André declaring they should test Sexton early on, and of Laurent Bénézech – in his guise as a former player turned writer – questioning Joe Schmidt and the Irish medical team for the decision to start Sexton and by extension the Parisian neurologist Dr Jean-François Cherman amongst others.

Admittedly Thierry Dusautoir maintained last Friday that he did not view Sexton as a target. In any event, there was something entirely predictable in Mathieu Bastareaud charging at Sexton at the first available opportunity. Whatever about him holding back or not, the French centre does lift his forearm into Sexton’s chin in almost something of a reprise of the incident which gave the Irish outhalf concussion in Paris last March.

It’s one of the ironies of the game that gouging is now so rightly abhorred and heavily punished, while the hand-off is legitimate. But this has blurred into a fend with the forearm, which World Rugby needs to outlaw again.

There is also the issue of players tackling high, a feature that originated with the desire to make ball-and-all tackles to prevent offloads which has been compounded by the introduction of choke tackles.

Indeed, with the help of Seán O’Brien and Robbie Henshaw, Sexton duly engineered a turnover scrum, with the choke tackle also manufacturing a couple of other turnovers, before Bastareaud leading high resulted in both players going to the blood bin in the second half.

Perception is everything, and the sight of so many players coming and going since the introduction of the head bin to augment the blood bin adds to the impression that the game is somehow more brutal, violent and injury-prone.

That said, the increasing preponderance of higher tackling will invariably heighten the risk of more concussions and is something which the game needs to address. It might also be a means of allowing more offloads.

With the advent of more cameras and disciplinary procedures, foul play has also been hugely reduced. But Pascal Papé wasn’t the first on Saturday to show that cheap shots remain in the game, witness Damien Choully after 85 seconds catching Sexton with a late swinging forearm after the outhalf had passed the ball from right to left. How the officials missed that was incredible.

Even so, when the video replays showed Papé kneeing Heaslip in the back the BBC commentator Eddie Butler said: “It’s black and white really, if he (Barnes) thinks that’s deliberate, that’s a red card” and reckoned Papé was “lucky” to only receive a yellow from Barnes, despite the referee saying it was “not an accident”.

Saint-Andre’s reaction in maintaining it was accidental is also typical of a modern game where coaches believe they must defend their players. But 10 minutes in the bin compared to the time Heaslip will spend out of the game hardly tallies. The French lock should receive a lengthy ban. gthornley@irishtimes.com