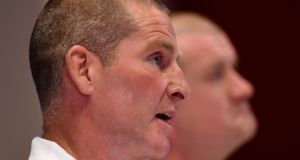 Stuart Lancaster has defended the omission of overseas-based players from his World Cup training squad by arguing their selection would only weaken the English game.

There was no place for Toulon flanker Steffon Armitage and Clermont full-back Nick Abendanon among the 50 named for England’s summer camp, despite their outstanding and consistent form in European competition.

One of the most divisive issues in English rugby has been settled by Lancaster’s steadfast refusal to activate the ‘exceptional circumstances’ rule and select players from the French Top 14.

After months of speculation and debate between the conflicting schools of thought, England’s head coach insists his priority must be to protect the interests of club and country.

“Where does it leave you if more and more players go overseas? In my opinion, it leaves you in a weaker position,” Lancaster said.

“Having our players play for English clubs is a hugely important factor for the short, medium and long-term health of the game. We believe it’s our responsibility as national coaches to protect that.

“Also, when the policy came out there was a commitment from a group of players to the England team.

“There were those players who were in England at time and there were some who made the decision to return to England. For the last three years they have dedicated themselves to the shirt.

“We believe that dedication and commitment would be eroded were we to change the policy now.

“Inevitably the situation would change after the World Cup in that overseas (players) would not be available to play for England again. Within that there are a whole series of dynamics we don’t want.”

England’s position on overseas players dominated the World Cup training squad announcement at Twickenham on Wednesday and it was the first time Lancaster has spoken at such length on the topic.

It had been thought that Lancaster was hoping to include Armitage among the 50 in order to assess the openside’s claim to a place in the final 31-man party named by August 31, but the 45-year-old insists his mind was made up long ago.

“The door hasn’t been held ajar in my opinion. I’ve been consistent on the policy since I started. We’ve not wavered nor changed our position on it,” Lancaster said.

“If we changed our position and the policy was different, then what could happen is more and more players would go to France.

“I read an article with Billy Vunipola in which he said one of the reasons he stayed at Saracens was because he wanted to play for England.

“I want to see George Ford play for Bath, Ben Youngs play for Leicester and Courtney Lawes play for Northampton.”

There was little scope for major surprises given the number of players being asked to gather at Pennyhill Park next month, but the return of veteran wings Chris Ashton and David Strettle after prolonged absences from Test duty was notable.

The Saracens pair, the most clinical finishers in the Aviva Premiership, were included ahead of Christian Wade and there was also room for rugby league convert Sam Burgess.

Burgess features in England’s summer plans just six months into his union education, although doubt persists over what position he will be asked to fill.

Bath have picked Burgess at blindside flanker in recent weeks and the 26-year-old has responded by playing his best rugby in the new code, but Lancaster is still thought to regard him as an inside centre.

“It’s a pretty unique situation Sam has found himself in, coming over to a new sport and playing in two positions so early in his career,” defence coach Andy Farrell said.

“He’s developed over the last few months and his game involvements have been right up there. We’re interested to see how much he has developed since he trained with us during the Six Nations.”

England are short on midfield firepower after Manu Tuilagi was suspended by Lancaster until January after being found guilty by Leicester Magistrates Court of assaulting a taxi driver and two female police offers on April 26.

“I’m disappointed for Manu personally, the coaches, the team and for the country because he’s a high quality player. It was a tough week last week. It’s disappointing all round, but it’s the right stance,” Lancaster said.