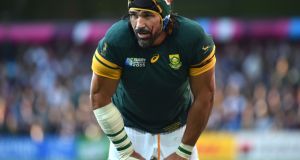 Blood runs down the face of South Africa’s lock Victor Matfield during the Pool B match against Samoa. The forward will missthe Scotland match with a knee injury. Photograph: AFP Photo

A bone of contention ahead of this match was the assertion Scotland were fielding a side that was some way short of their strongest team with an eye to the final pool match against Samoa.

The case for their defence centred on greater depth within Vern Cotter’s squad and therefore the facility to mix and match a little more. What is unequivocal is the Springboks need to win this match having lost their opening game to Japan.

They must do so without captain Jean de Villiers and his potential replacement Victor Matfield; the former out of the tournament while the latter is hampered by a knee injury and misses the match.

The average age of the midfield axis of Handre Pollard, Damian de Allende and Jessie Kriel is a smidge over 21.They are surrounded by an experienced group though both up front and in the back three.

Scotland can afford to lose and still make the quarter-finals if the beat the Samoans. Their schedule has meant they have faced careworn sides in Japan and the USA.

The Springbok’s need is greater and that might just give them enough of an edge.