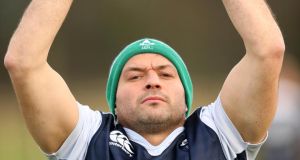 Seán O’Brien has emerged as a significant doubt for Ireland’s opening defence of their RBS Six Nations title against Wales at the Aviva Stadium.

The 28-year-old Lions flanker was forced to sit out training yesterday with a hamstring injury and it is understood that the Ireland management are awaiting the results of a scan on the injury.

“Other players have these things and we have to just manage him and he doesn’t have to train again until Friday,” said Ireland forwards coach Simon Easterby.

“We are pretty comfortable with the amount of work he has done in the early part of this week and last week to feel that we could manage his tightness.”

Were O’Brien ruled out the likelihood is that Tommy O’Donnell would wear the number seven jersey.

The 28-year-old has recently recovered from the dislocated hip he suffered in the first of Ireland’s warm-up match against Wales in Cardiff last August.

His uncapped Munster team-mate CJ Stander is also vying a place in the match-day squad.

As an Irish flanker who spent 15 seasons in Welsh club rugby as a player and then a coach before coming aboard the Irish set-up, Easterby knows Sunday’s opponents well.

Under Warren Gatland, who gave Easterby his Ireland debut in 2000, Wales have pretty much been what it’s said on the tin for years; Warrenball et al.

“Yeah, that’s something that they’ve always prided themselves on: ‘This is what we are and you’ve got to stop us doing what we do!’” said Easterby.

“It’s an experienced team and more often than not with that Welsh team they do things very well.

“In some ways when you know what’s been selected you know how they’re going to play the game, but it’s one thing knowing that and one thing stopping it.”

Indeed, in the eight Six Nations’ campaigns since Gatland came into the job in 2008 Wales have won 29 of 40 matches in the Six Nation; a 72.5 per cent winning return also incorporating Grand Slams in the post-World Cup championships of 2008 and 2012.

The nature of the World Cup quarter-final exit to South Africa, on top of a pool defeat to Australia, has also highlighted Wales’ poor record against the southern hemisphere teams and prompted a style debate akin to the Irish one.

But Easterby had Ireland also in mind when not foreseeing any significant change in Wales’ direct approach.

“I’ve seen a few things [said] but not picked up on anything about how they’re going to change, if at all.

Whereas Wales retained all but one of the tight five and two of the pack that started last March, while demoting Gethin Jenkins and Dan Lydiate to the bench, Ireland will be shorn of five tight five forwards who featured in that defeat; namely Mike Ross and Paul O’Connell, as well as the replacement trio of Cian Healy, Marty Moore and Iain Henderson, not to mention long-term absentee Peter O’Mahony and now, possibly, O’Brien as well.

Nonetheless, losing O’Connell and Henderson for a rendezvous with the experienced Alun Wyn Jones and Luke Charteris appears to make the challenge in the engine room several degrees hotter, and Easterby admitted: “Any side losing someone of Paul’s quality would feel like they’re missing something.

“But Paulie would be the first to say we’ve got to move on as a team. We’ve got to work with what we’ve got and we’re really happy with the physicality of the guys who have come in.”

Citing the “outstanding” tackling of Ultan Dillane and Mike McCarthy this season, Easterby added: “Certain guys have come in and when you lose one player with qualities, you bring another guy and those qualities slightly change.”

Some challenge though, which appears to be almost growing by the day.