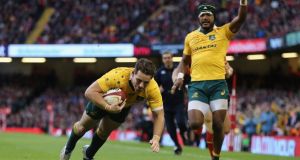 Shaun Edwards feels Wales need to take a leaf out of Ireland’s All Blacks-beating manual to cure their autumn blues.

Ireland stunned the rugby world on Saturday night with a maiden victory over New Zealand — the All Blacks’ 40-29 defeat in Chicago their first in 18 matches.

It was a far cry from Wales’ lacklustre performance in their 32-8 defeat to Australia in Cardiff, which was over as a contest before half-time and extended the hosts’ miserable record at the start of autumn campaigns.

Wales have not opened their autumn programme with a win since beating Romania in 2002.

And defence coach Edwards, who saw Ireland’s historic victory over New Zealand on television, admits Wales have to be far better if they are to overcome Argentina on Saturday.

“But Ireland hit it off a fortnight’s work together, so maybe we have to learn whatever Ireland are doing in the autumn internationals.

“But I think there will be a big response on Saturday.”

Skipper Sam Warburton could also return after getting game-time for the Cardiff Blues in the Guinness PRO12 last weekend following a neck injury, and Alun Wyn Jones is back in camp following a family bereavement.

But scrum-half Rhys Webb is almost certain to miss out after suffering a knee injury against Australia and centre Tyler Morgan is sidelined by a hamstring problem. Cardiff pair Cory Allen and Tomos Williams have been called into the squad.

On Argentina, Edwards added: “They play quite a loose game and have got a powerful pack, they are a good driving line-out team.

“We have to counteract that and they have got some very quick nimble backs who don’t mind playing from inside their own 22. So it’s a big challenge defensively.

“We’re playing a top eight ranked team who compete in the Rugby Championship, I couldn’t think of a better fixture to bounce back after the Australia game.”

Edwards said Wales were addressing defensive problems which saw Australia run in five tries at the Principality Stadium, three of which came before half-time.

Wales have now conceded 32 tries in six games, although Edwards was quick to point out that three of those matches were against New Zealand.

“Do I think we can defend better on Saturday? Yes I do. I am determined to make that happen,” Edwards said.

“Australia could have scored five or six tries and I am not happy with my own performance.

“Stephen Larkham (Australia attacking coach) got the better of me on the day.

“I holds my hands up, but anybody that knows me knows I am a determined person.”