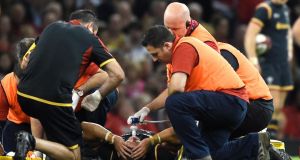 Shane Williams has questioned Wales coach Warren Gatland’s decision to field Leigh Halfpenny against Italy on Saturday in a move that backfired, with the full-back suffering a suspected knee ligament injury.

Toulon full-back Halfpenny should learn the results of scans on his knee on Monday but his participation at the World Cup is in grave threat.

Former Wales wing Williams admitted the country is already “in mourning” over injuries to Halfpenny and scrum-half Rhys Webb.

“Rhys Webb has been the form player for Wales over the last two seasons. To lose Halfpenny as well, it’s just a massive blow for Wales and it couldn’t have come at a worse time.

“You kind of thought ‘do we need this guy on the field? Let’s wrap him up in cotton wool and roll him out when we really need him’.

“It is a massive blow and Wales is in mourning already. Especially with Halfpenny, he was strapped up on his leg anyway.

“Then you have players like Matthew Morgan just been included in the squad, and a lot was mentioned about him maybe getting a run at full-back. And of course you have Liam Williams who is just coming back from injury and isn’t quite there.

“So you could see why they had to go with Halfpenny or Morgan, but Leigh’s such an important player for Wales and maybe he didn’t need the game-time as much as Matthew Morgan or even Hallam Amos maybe.”

Wales edged out Italy 23-19 at the Millennium Stadium in Saturday’s final World Cup warm-up clash, but the collateral damage could dent their chances at the fast-approaching global tournament.

Head coach Gatland’s men will open their Pool A battle by facing Uruguay in Cardiff a week on Sunday, with both Halfpenny and Webb now huge doubts over taking any part in the tournament.

Former Scotland and British and Irish Lions coach Sir Ian McGeechan called on Gatland to draft Mike Phillips back into his Wales squad in the event Webb misses the World Cup.

McGeechan admitted he was shocked to see Gatland jettison Phillips, along with other big-name stars James Hook and Richard Hibbard, from his original 31-man World Cup selection.

“You’ve got to look now at what they can do and the potential replacements,” said McGeechan.

“And I was surprised they dropped Mike Phillips, he really impressed me in 2009.

“The build-up to the World Cup is three or four months so you’ve got control of the players in fitness terms, so you can prepare them as you need, not rely on what happens elsewhere.

“So I think he’ll be looking now at how he uses Mike Phillips at scrum-half, to bring in that experience.

“Although he’s lost his number-one nine, he’s got to be looking at how he shakes that up with the others.”

1 Six Nations: Ireland v England all you need to know guide
2 Ireland wary of Peyper calling the tune as they head for Twickenham
3 Owen Doyle: Day of the jackal may be coming to an end
4 Andy Farrell ticking all the boxes in advance of England showdown
5 Wales and France name their teams for Six Nations clash
Real news has value SUBSCRIBE

Liverpool’s Klopp responds to Donegal schoolboy who asks him to stop winning 15:29
England bring back prop Beno Obano as frontrow concerns grow 15:06
Messi: ‘it never occurred to me to leave and does not now either’ 14:28
Wales and France name their teams for Six Nations clash 14:19
Roger Federer to miss French Open after knee surgery 12:45
Here is your handy guide to sport on television this week