Second coming proving all the sweeter for Brumbies’ Clyde Rathbone

Former Wallaby looking forward to locking horns with the Lions 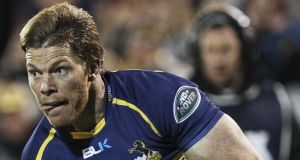 Clyde Rathbone of the Brumbies will be up against the Lions’ Shane Williams today. Photograph: Stefan Postles/Getty Images

As unlikely head-to-heads go, it’s fair to say the odds on Clyde Rathbone confronting Shane Williams on the Lions tour a year ago would have been astronomical.

Much of the focus for this game has been on Williams, who retired from Test rugby in 2011, made his farewell, appearance in Europe for the Ospreys at the end of last season in their Rabo Pro12 final win over Leinster at the RDS and has been playing in Japan while keeping fit for a charity boxing match before heading this way as a pundit for TalkSport Radio.

Yet Rathbone’s story is even more heartwarming. Having spent his childhood in Durban, he represented South African Schools and captained the under-21 national team to victory in the 2002 Rugby World Cup, before playing for the Sharps before controversially opting to move to Australia where he qualified to play for the Wallabies by dint of having an Australia-born paternal grandmother.

The rest of his family followed him two years later to Australia, where he spent seven seasons playing with the Brumbies and won 26 caps with the Wallabies, scoring a hat-trick in his second Test against England in June 2004 and a match-winning try against his native country in Perth that same year. This only compounded the opprobrium he received in South Africa.

Broken cheekbone
Injured for most of 2005, in 2007 Rathbone was sidelined for 15 months due to knee surgery for a torn patella tendon and after suffering a broken cheekbone in 2009 he retired.

In January 2012 he posted a long, heartfelt and honest account of his battle with depression before returning to training in August and making an unlikely but rewarding return to Super Rugby at the age of 31 with the Brumbies this season. In his eighth outing with them last Friday week, he scored a classy couple of tries.

“It’s strange how things happen,” Rathbone told The Irish Times yesterday with a chuckle ahead of today’s game and his match-up with Williams, whom he described as an exceptional player.

“I haven’t seen him play the last couple of seasons because he’s in Japan, but you look at a guy like George Smith and how well he’s gone in Super Rugby since coming back and I’ve got no doubt that he (Williams) will still have all the qualities he had before he left. He can sidestep you in a phone booth. Just trying to limit his time and space is the key thing I guess.”

A pleasant and articulate as well as inspiring man, Rathbone recalled watching the last Lions tour here 12 years ago. “It’s amazing how those games stand out in the mind. You watch replays that have been circulating on television in the last few weeks. It’s hard to believe it was 12 years ago.”

Within a year the then 21-year-old made his decision to emigrate. “Coming over here was a bit of a step into the unknown. The Brumbies back at that stage most of the guys had been involved in the 1999 World Cup, they were a very exciting group to be a part of and just the culture down here was very appealing to me.

“There were also all the lifestyle factors about leaving South Africa and coming here; safety and security and all those type of issues.”

“I haven’t regretted it,” he added. “It was the best thing we’ve ever done.”

As for his second coming, not least from depression, he is frank and forthright.

“I think it’s the way forward with mental health and depression, and particularly amongst blokes, is to reduce the stigma attached to it. And the only way we can do it is have more blokes come out and talk about it.

“When I put my story out publicly the thing that struck me was the contact from people all over the world, from all walks of life. It just highlighted the fact that it doesn’t discriminate . . .”

Former South African under-21 coach, Jake White, invited him to train with the Brumbies at a time when, as he puts it, his phone wasn’t buzzing off the hook.

“The winning and the losing is not really that important, but the individual moments that go into the results are extremely important. It’s a blurred distinction, but it’s a very important one.”