Scotland fight back to claim a thriller against France 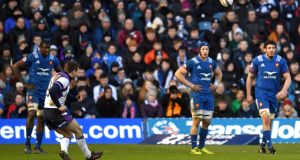 This will hardly have them dreaming of a first championship of the century, but Scotland are back on track at least. They were their usual selves, brilliant when the mood took them, all over the place when the mind wandered. France arrived hoping to build on the promise of their first outing under Jacques Brunel – and it seemed as if they might, Teddy Thomas streaking away down the right twice in the first half. France held the lead for most of the match, but the relentless accuracy of Greig Laidlaw, restored to the team and a much-needed focus of accuracy and consistency amid the chaos, hauled Scotland to victory, hitting the front only with 10 minutes to go.

Scotland’s effectiveness here is not in doubt, which will make next round’s Calcutta Cup all the more delicious, but not so long ago they might not have found the confidence to chase France down like this. Two first-half tries of their own kept them in touch, but it was the six penalties of Laidlaw in the second half that took them home.

It had looked, though, as if the looseness of their defeat in Cardiff last week might cost them again, when Thomas tore them apart for those two tries early on. The first was almost an exact replica of the one he’d scored around 13 minutes of rugby earlier - towards the end of last week’s match in Paris.

Geoffrey Doumayrou’s bounced pass disconcerted the Scottish defence – not that that takes much doing at the moment – and Thomas beat Russell on the outside, then Peter Horne, cut inside the forlorn attempt of Stuart Hogg and cantered to the line on an eerily similar arc to that of his try against Ireland.

The despair in Murrayfield was palpable. It was apt that Russell and Hogg were involved, representing so neatly as they do, the problems with this Scotland team, rich to obscene in attacking gifts but maddeningly flaky, their concentration levels unreliable, as if the boring stuff is a tedium for others to trouble themselves with.

The pattern was repeated again and again in the first half, particularly by Russell who kept undoing the fabulous with these pesky little errors, which end up so costly. By the end of the first 10 minutes Scotland had fallen further behind to a Maxime Machenaud penalty, but they responded with some smart rugby entirely in keeping with the angelic side of their nature. Hogg’s chip to the corner from a first-phase move was perfect, and from the lineout and subsequent phases Russell put Sean Maitland over in the corner.

But Thomas was at it again in the third quarter, chipping over Hogg to beat Greig Laidlaw to the bouncing ball, a bounce as inconsistent as Scotland confounding the covering scrum-half. Consistent with the highly entertaining encounter, though, Scotland responded with more brilliance five minutes later, Huw Jones cutting a superb line to the posts keep Scotland in touch.

A soft penalty against Jonny Gray at a lineout at the end of the first half allowed Machenaud to open up a six-point lead in France’s favour at the break, and the soft-penalty routine continued on a tit-for-tat basis throughout the third quarter, as both teams sounded out the other’s defence. Baptiste Serin replaced Machenaud at half-time and exchanged five penalties with Laidlaw, such that the game entered its final quarter with France just the three points ahead.

Then the game was level. The scrum was one area France might have been thought superior, but Scotland held up well throughout, and won a fourth penalty of the second half at that very set piece. Laidlaw’s penalty locked the scores up with 15 minutes to go.

Fitness, though, was one area Scotland were thought superior. Their hundred-mile-an--hour philosophy may get them into trouble sometimes, but it’s mighty effective if the game is in the balance at the sharp end and they’re fit enough to keep pursuing it. And if the opposition are not. France were noticeably flagging as wave after wave of Scottish attack hammered into them. Serin was caught off-side with 10 minutes to go, Laidlaw obliged again, and Scotland finally had the lead.

All the calls were now going their way, as they pressed harder. An attacking line-out set up Laidlaw for another, when Yacouba Camara was unable to roll away at a ruck. With five to go, Scotland’s lead was six. The tide of penalties against France suddenly broke, and they went for touch, but a laboured lineout and drive betrayed their fatigue and despondency at how the game had got away from them. Scotland won the turnover to play out a victory of some relief. – Guardian service