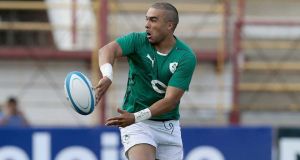 Despite emerging with an apparently clean bill of health from a bruising and sapping first test win in Residencia, true to Joe Schmidt’s word in giving every member of the 29-man squad game time, Ireland are set to make up to seven changes for next Saturday’s seasonal finale in Tucuman.

Conor Murray could be seen leaving the Estadio Centenario on crutches but this was a precautionary measure for a dead leg, and by the time the squad flew to Buenos Aires yesterday the scrum-half was walking without bother. There appeared to be more concern on the sidelines about Luke Marshall even before he was withdrawn in the 57th minute.

The Ulster centre looked fairly banged up after bravely saving a try in a decidedly mixed bag of a performance, and this raises the distinct possibility that Leinster centre Noel Reid, a late addition to the squad last week, could be brought in to make his debut alongside Darren Cave, who went well enough to deserve another run in the number 13 jersey.

Outhalf Johnny Sexton was replaced in the second half suffering with tightness in his quad, but is expected to recover on time.

“We’d expect that there will be changes,” said Schmidt on Saturday night. “We’ll have a little bit of a look at who came through today over the next 48 hours. We won’t do a lot tomorrow, a little recovery and back to Buenos Aires and we’ll see how we go from there.

“We’ll try and make some decisions on Wednesday and try and set that up for a really positive training on Thursday. The changes we made were fatigue or cramp based or just giving guys an opportunity.”

Asked what he learned about the new faces, Schmidt said: “It’s hard to say right now, because I’ll look more forensically at the video and we’ll be able to see a little bit more of the individual efforts. You get a little bit encompassed by the team delivery during the match, then you try and divide that into seeing what the individual delivery was like.

“There was a few guys who, at first glance, appeared to do a good job and other guys who did bits and pieces well and will have things to work on as well.”

Rob Kearney is sure to return at full-back and the likelihood is that Fergus McFadden will start, most probably on the wing and quite possibly at the expense of Simon Zebo.

Schmidt gave favourable mentions to the debutant Robbie Diack and Jordi Murphy up front, as well as Rory Best and Paul O’Connell, and also Darren Cave and Andrew Trimble while exonerating them from missed tackles. Marshall and Zebo were not mentioned by name.

Zebo won one key restart in the build-up to Ireland’s first-half try off a maul after falling behind, and made a wondrous offload to Cave which almost led to a try, but missed a couple of tackles too.

In any event, when specifically asked about Zebo, Schmidt rather pointedly remarked: “Yeah, Simon was alright.”

Eoin Reddan could return at scrum-half, with three more Leinster players recalled up front, namely Devin Toner, Rhys Ruddock and Jamie Heaslip. Furthermore, after giving debuts to Diack, Kieran Marmion and Rodney Ah You last Saturday, the likelihood is the uncapped pair of James Cronin and Rob Herring will at least make the bench.