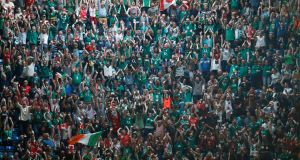 So far, Ireland have skitted around the edge of this World Cup, from Cardiff to Staffordshire, and have yet to set foot in London. And that’s the way it’s liable to continue.

If Ireland make the quarter-finals, over the first five weekends of the tournament the squad will dip into London for the next two weekends, for their games against Romania and Italy at Wembley and the Olympic Stadium. After that, it’ll be back to Cardiff for a week or two, with Ireland not to set foot in London again until the final two weeks. You somehow sense this is the way Joe Schmidt likes it, and hence the way it was largely planned.

Cardiff gets a bum wrap. Listening to Hugh Cahill, a top bloke, commentator and presenter, on 2FM’s Game On before flying to Cardiff last Thursday morning, he was lacerating the place. It’s a popular sport, laying into the Welsh capital. The English joke that they shouldn’t be asked to pay into Cardiff via the Severn Bridge – rather that they should only required to pay the exit toll.

Well, the Red Dragonhood’s supporters will be paying in and out in the droves this weekend, for the long-awaited Anglo-Welsh set-to. The demand for tickets has been greater than for the World Cup final itself, and one ventures the Welsh fans may have had something to do with that. And unlike vast swathes of London, in Cardiff you assuredly know when it’s a rugby weekend.

It’s also true that there are insufficient hotel rooms for a mass rugby invasion, and hotels grossly overcharge. Yet everything is within walking distance, and there’s a proper feel of an occasion for a rugby match. That all applied when the estimated 50,000 Green Army descended upon Cardiff last Friday and especially Saturday. Not having to commute from London or even Bristol by train, and certainly not having to commute back, was to dodge a bullet. Cardiff train station was hideously over-crowded.

But the streets of Cardiff and the Millennium Stadium have generally been good for Irish sides, be it the national team or Munster and Leinster especially. There have been Grand Slam and Heineken Cup coronations there for all three. Not surprisingly, as an away venue, Irish players repeatedly cite it as one of their favourite venues.

No less than for those Heineken Cup finals, the crawl on the team bus which takes in one end of a sunlit St Mary’s St swarming in green-clad supporters opened the players’ eyes as to how much the opener against Canada would be akin to a home match. Given their familiarity with the venue, and the likelihood of this being repeated for the next three pool games this is helpful.

Even Welsh journalist colleagues were impressed by the sense of occasion on Saturday. Then the Brave Blossoms did the unthinkable, and no less than the accompanying roars in the adjoining Cardiff Arms Park fanzone, even the press room erupted like everywhere else bar South Africa when Japan won.

Cardiff, as a city, knows what to expect on such weekends and responds accordingly. The clean-up operation had the streets ready to go again from early in the morning on Sunday, which began with first sightings of the pockets of Uruguay fans. Cue the mass Welsh invasion in red, and leaving Cardiff by car, the bumper-to-bumper tailback went on for miles and miles in the opposite direction. Definitely better to be departing rather than arriving.

St George’s Park is a haven devoted to sporting excellence away from not just the madding crowds but virtually anyone from the human race. The facilities will not be equalled at any of the other 41 bases in the tournament. Manna from heaven most probably for Joe Schmidt, his coaches, Paul O’Connell, Johnny Sexton et al for a solid week’s training.

Nevertheless, the taxi driver had a vague notion of something called the Rugby World Cup, but was oblivious to the Irish squad’s presence in the FA’s National Football Centre, and surprised to learn they were.

Another 15-minute drive away is Barton-Under-Needwood, the kind of quaint little village the English do so well. The Three Horseshoes bar does good steaks, as well as ale, lager and even Guinness. Again though, the World Cup or team Ireland hadn’t registered.

One could well imagine the English footballers escaping of a night out to the Three Horseshoes Bar after becoming a little stir crazy when cooped up here and Steven Gerrard is amongst those who admitted the place could be boring.

Five days here is about right. This afternoon the Irish squad take the footballer’s route from St George’ Park to Wembley, where they’ll stay for three nights, before re-locating to Guildford, about 27 miles southwest of central London in Surrey for four nights, and then back into Canary Wharf for three nights.