RWC Final: Dan Carter and Richie McCaw rise to the occasion yet again 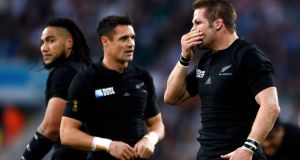 In the end it was all about McCaw and Carter. Never again will we see their likes. Certainly not at the same time.

Before Carter grabbed hold of this contest, as he did the semi-final, the breakdown was where McCaw had to go and prove himself all over again.

“I don’t think you can ever have enough of it,” said the winning captain afterwards when asked about retirement.

The art of fetching, a study in openside wing-forward play was before us in all its glory. Richie McCaw, the ultimate master of the craft, probably playing his last game of rugby and David Pocock, he who would be king, were matched by the devilishly annoying Michael Hooper in a first half that will never be forgotten.

New Zealand were denied total dominance on the scoreboard by the Wallaby backrow’s brilliant resistance. The All Blacks came with all their might, all their skills, pounding and angled running which sliced through and went around this gold defence.

Hooper was freakish in how he managed to outplay Pocock and Scott Fardy in that opening 40 minutes. But all three of them were immense.

One thing remains true, you can’t win a World Cup without a number eight. A possible chance was presented to Australia when Kieran Read landed heavily on his right ankle. It was strapped up as this Goliath refused to let pain end his second final appearance.

That was only the beginning.

There was a hint that Australia could make it a day of scrums as Scott Sio got an early lock on Owen Franks to allow Bernard Foley make it 3-3. But it was all about the flankers.

14 minutes: Not 10 seconds after a McCaw steal to match any in his epic 14-year Test match innings, Hooper and Pocock envelope Julian Savea, tearing the pill from the big winger’s clutches.

18 minutes: New Zealand were unstoppable. Aaron Smith said to hell with three points and tapped but Hooper got over Jerome Kaino just under the Australian posts to deny a certain try.

But it would never end. Unless Carter was unable to rise from Sekope Kefu’s late tackle.

“Get the timing a bit better,” Nigel Owens warned the tighthead.

But it just did. Australia clear, the All Blacks pour back into them.

New Zealand respond by unleashing a stamped through midfield as Kaino and Read are followed by the two-metre giants Sam Whitelock and Brodie Retallick. It led to Matt Giteau suffering the same fate as Brian O’Driscoll did in November 2013; concussed by Retallick’s ogre carry. It was ugly viewing as Giteau’s legs remained sprawled in the air when he tried to find some equilibrium. He struggled to get up, he fell, he crawled like a boy in search of rolling marbles. He got up and ran in the wrong direction. He went down on his knees again before the medic eased him onto his back.

Kurtley Beale arrived as Carter made it 6-3 after another illegal tackle on him by Kepu. Owens warned the tighthead a second time.

The third Carter penalty, which made it 9-3, will drive Michael Cheika crazy. It came after a forward pass by Nehe Milner-Skudder that Wayne Barnes missed. “Was the pass okay?” Owens asked. Barnes nodded.

The last few minutes of the first half were truly all black. All McCaw. He carried, he offloaded, he forced his team-mates to rise to this occasion in what New Zealanders call the championship minutes.

38 minutes: A try from rugby heaven was almost stymied by Pocock and Fardy at the breakdown. Nearly. It came back with Aaron Carter darting a phenomenal pass to Conrad Smith. The scrumhalf arched around the centre and took the return gift before feeding McCaw who caught and passed to Milner-Skudder.

Conrad Smith’s All Black career was over. On came Sonny Bill Williams, whose first act was to offload despite three Wallabies clinging to him and release the dancing Milner-Skudder. Two phases on and it comes to Williams again, and another offload finds Ma’a Nonu. Step, step into space went Nonu. Beale came to him but some outrageous acceleration off his right foot set Nonu free.

A try that could decide any World Cup final. But it didn’t. Carter did.

56 minutes: McCaw and Hooper break even at a ruck. They rise in a violent embrace that in years past would have guaranteed a few punches. A yell by Barnes was enough to untangle them.

And away they went.

63 minutes: Australia never know when they are beaten. Will Genia glances up and sees Foley on the wing, the kick is gathered and the outhalf’s offload allows Tevita Kuridrani to power to the try line.

67 minutes: A game can be dominated by flankers but twinkle toes always settle it. Carter takes over. His line kick puts New Zealand where they need to be.

69 minutes: Carter lands a 41-metre drop goal that is even better than the one against South Africa. Seven points of breathing space.

74 minutes: That wasn’t Carter’s last important act as the New Zealand No 10 because the scrum offered him another shot at the posts from about 48 metres. Perfection followed: 27-17.

Tackle after tortuous tackle, McCaw guided them home with the Beauden Barrett try being a quick glimpse into a safe future.

That McCaw’s last duel was against Pocock and Hooper seemed fitting (Unless he stays for the Lions tour?). That they were unable to rip this era from him merely reminded us we were watching the most magnificent player we may ever see. But to win a second World Cup New Zealand needed both of them, Dan and Richie. The two greatest players we may ever see.