RWC #13: A mighty dragon wakes from its slumber 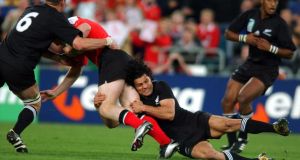 It hasn’t really helped that the majority of World Cup tournaments have been played out during two decades in which Welsh rugby was at one of its deepest ebbs.

Among the lowest points was the infamous defeat to Western Samoa at the old Cardiff Arms Park in the 1991 tournament, as well as another defeat to Samoa in 1999.

But in 2003, after a decade in the doldrums, the fortunes of Welsh rugby seemed to turn and the 90-point epic against New Zealand in Pool D could be seen as the catalyst for change.

Having beaten Tonga with just one score separating the two sides before making lives difficult for themselves against Italy, Steve Hansen’s side were expected to get a hiding from the All Blacks, who were averaging 76 points a game.

The hammering never materialised though, and instead one of the most extraordinary and gripping games ever played at the World Cup unfolded in Sydney.

It was an exhilarating encounter, one full of verve and daring and the type of running rugby both nations have always been the best exponents of.

New Zealand roared into 28-10 lead with tries from Leon McDonald, Ali Williams and a brace for Joe Rokocoko cancelling out Mark Taylor’s score. But then Wales fought back.

Sonny Parker scored one of the tries of the tournament, engineered by the genius of little Shane Williams, before Colin Charvis and then Williams gave Wales an improbable lead.

After New Zealand’s 53-37 win the Western Mail said: “The Buzz is Back in Welsh Rugby.” Two years later, Wales would win the Grand Slam.

Somewhere in the Valleys, a mighty Dragon had woken from its slumber.