Unlike 2007, Ireland must start with a quality performance, says forwards coach 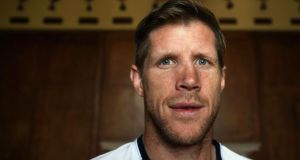 Simon Easterby: ‘The defence has to be watertight. That has been a real focus.’ Photograph: Brian Lawless/PA

True to the Joe Schmidt script, Simon Easterby is not one to look beyond the next match. Nor is he inclined to look back on the World Cup campaign of 2007 without shuddering a tad. But with the latter in mind, and thus generating momentum for sterner tests beyond this Saturday, Ireland’s forwards coach has admitted that Ireland have to hit the ground running against Canada under the Millennium Stadium’s closed roof.

To that end, Easterby said yesterday that the coaches are looking to pick a strong side for their opening group game. With Romania to follow a week later, the schedule should allow Ireland to rotate their squad and rest some frontliners for the Italy and France games, akin to 2011 and unlike 2007.

Then, the nature of the scratchy win over Namibia prompted Eddie O’Sullivan to make only one, injury-enforced, change for the even messier win over Georgia, which all but scuppered Ireland’s hopes even before meeting France and Argentina.

“We don’t want to look back, but we have been in this scenario before and we are very much focused on delivering a quality performance with a strong side against Canada. We’re not looking beyond that.”

Easterby and Schmidt were at the Stoop last Sunday week when Canada scored a couple of late consolation tries in a 47-18 defeat to Fiji, which followed previous warm-up wins in the UK over Glasgow (19-12) and Georgia (16-15).

“Although Fiji stretched their lead, Canada came back into the game and looked every bit as competitive as you would expect,” said Easterby. And any pack featuring the abrasive 37-year-old Clermont lock Jamie Cudmore, who will be competing in his fourth World Cup, has to be combative.

“Cudmore is one of several players that play professional rugby,” Easterby added. “They’ve got [Tyler] Ardron, who plays for Ospreys. Jeb Sinclair plays for London Irish, but Jamie is the heartbeat of the team, he’s the heartbeat of Clermont as well.

“They have a really good forward pack who can mix it, but they’ve also got players like [DTH] van der Merwe and [Jeff] Hassler who can mix it, who are pro players who can play at the top end of the game in Europe. When you’re mixing players who maybe are not as well known, like [Aaron] Carpenter, John Moonlight and [Nanyak] Dala, they’ve got a good footballing team.”

Cudmore and Easterby were team-mates with the Scarlets when the well-travelled Canadian played there in 2002-03.

“He’s a good guy,” said Easterby. “He just leads by example. He’s probably a little bit slower than he used to be in terms of what he can do around the pitch, but his experience is vast and he’s probably the first on their team sheet. ”

Nicknamed “Cuddles”, which is assuredly heavily laced with irony, Cudmore is an old sparring partner of Paul O’Connell’s, dating back to their fight in a Munster-Clermont game at Thomond Park almost eight years ago.

Easterby described the two evergreen locks as “very competitive, and they’re both winners”.

As to whether O’Connell would lead Ireland out in the first match of his fourth World Cup, Easterby said: “That’s Joe’s job.”

But he is surely itching to do so? “I’d say so,” said Easterby.

In a collective sense, Easterby said Ireland are looking for more consistency in the line-outs, scrums, and defensively. “We’ve slipped off too many tackles and offered opposition too many opportunities to play with the ball. The defence has to be watertight. That has been a real focus for us for the last couple of weeks.”