Rory Best set for recall in autumn Test against Australia 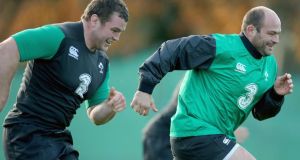 Ireland approach their final Guinness Series Test in ruder health than Joe Schmidt and the management ticket might have envisaged. Saturday’s rendezvous with Australia has come a week too soon for Jared Payne (foot sprain) and Mike McCarthy (concussion), but against that Rory Best is fully fit and in line for a recall.

The Ulster captain looks sure to be involved against the Wallabies after returning to full training yesterday. With 77 caps to his name, Best has long since built up a level of trust amongst successive Irish coaches and his latest Irish forwards coach, Simon Easterby, is clearly glad to have him back.

“He stayed in and around camp for the last couple of weeks to go through his rehab and return to training and he trained today. It’s a great position to be in at the moment, in that position in particular. We’ve three very good hookers currently available to us, which is excellent and probably a real strength for us.”

“Sean’s continued some of that form from his Leinster performances through into South Africa,” said Easterby. “He’s dynamic, he can break the game up and not many players can do that and he’s got other things he has to work on constantly and he works hard to do that. So he’s in a good place, it’s the same with Straussy. He’s come back from a long lay-off but he’s another one who’s been very good in the environment, he trains really hard.”

“He came in and started at the weekend, his lineouts were excellent, there was lots of good tempo in his game and he scrummed pretty well. So there’s real positives and Feeky (Greg Feek) is obviously happy he’s got three good hookers to choose from at scrum time as well as what we want to do at lineout time.”

As a former prop, Best has a reputation for being a strong scummaging hooker, and as Easterby conceded: “He’s probably at a different place in terms of his experience than the other two and you have to reward some of that experience sometimes in terms of knowing what a guy can do. He’s only been out for a couple of weeks so having him available is a real plus, especially when we went into the other two games missing him.”

Furthermore, Easterby echoed Greg Feek’s description of Ireland’s win over South Africa being “bittersweet” when admitting: “We’d just knocked over a very good team but there were certain elements of our game, our lineout ball-winning and our scrum, which just weren’t good enough.”

Experience would also make Gordon D’Arcy favourite to retain his place and thus start ahead of Stuart Olding inside Robbie Henshaw, who will presumably move to outside centre in light of Payne missing out. Whether significant or a curve ball, Olding was one of those on some media duties yesterday.

“Robbie is seen there as someone who went really well against South Africa,” said Easterby. “He didn’t play against Georgia, whoever partners him whether it be Stuart or Darce, they’ve a big job to do because Jared and Robbie combined pretty well together. I think there is definitely different dimensions to both those guys. Darce has got 80 caps now, you can’t just produce that type of experience overnight and he’s a bi-game player.

“Stu’s gone really well for Ulster, when he gets going forward he’s got good footwork, he sees the game really well and can play in more than one position as well so there’s a good balance to those two as to who plays alongside Robbie.”

Well though Rhys Ruddock played against South Africa, and tellingly he, Jamie Heaslip and Peter O’Mahony were all rested last weekend, the coaching staff might also look at the backrow and the need for an openside to counter Michael Hooper. That said, Chris Henry’s health, having been diagnosed as suffering from a temporary blockage of a small blood vessel in his brain on the morning of the South Africa game, is altogether more important.

“It was a real shock,” admitted Easterby. “He’s getting exactly the right medical attention. The treatment nowadays is probably far advanced from where it was a couple of years ago. He’s in a good place. We’re hoping he will be available to Ulster before very long and then back available to us before too long also. It’s positive, I think.”

1 Rugby players taking the opportunity to focus on the long game
2 Coming fourth in the Olympics didn’t change this fearless quartet, time did
3 Gerry Thornley: Home and away Six Nations could be its ruination
4 The story of Mario Gotze: a rare illness and unfulfilled potential
5 Decision expected next week on staging of College Football game in August
Real news has value SUBSCRIBE