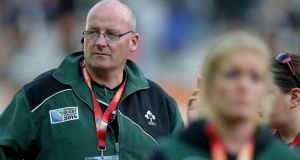 Ireland head coach Philip Doyle after the defeat to England at the Stade Jean Bouin in Paris.

Back in 1989 my father bought a larger house for his growing family. Not long after moving in the lights went out. Total blackout. In the middle of the night. Ray Cummiskey couldn’t solve the problem so he phoned a young electrician that he played alongside during his last season with Blackrock College RFC.

It had been Philip Doyle’s first campaign in adult rugby.

‘Goose’, as he is affectionately known in rugby circles and the motorcycling fraternity, showed up within the hour, pulled opened the garage and flicked a switch.

Doyle, who has a growing family of his own nowadays and following two stints as Ireland head coach must refocus on that electrical contracting business.

Before that the man needs some well earned Me time. The only amateur head coach among the professional elite at this World Cup is off to do what he loves best (which is not coaching rugby).

“I’m gonna get on my motorbike and drive. That’s what I’m doing, boy! The week after I get home I’m away on a three-day bike trip around Ireland. Got a few mates in the biking fraternity who know NOTHING about rugby. All good. No rugby talk. All about the bike.”

Continuity is a problem. It can’t be current attack coach Greg McWilliams, as he takes over the rugby programme at Yale University in the fall.

“We didn’t want to commence the appointment process during the World Cup as it would have caused distractions,” said Walker.

Usually the IRFU reappoint their (male) coach before the tournament. Will he or she be employed on a professional basis? “The national coach will be contracted for X number of days, as Philip was. It could be a professional position in the future, it just depends on where the union sees the women’s game going forward beyond the (2017) Rugby World Cup. ”

The IRB recently confirmed that after a lot of lobbying from the Irish perspective.

“The 15s is the club game . . . Sevens is not really about participation, it is an elite type sport. So, 15s is very important to us.”

Any chance of the new women’s coach being gifted with some November Internationals? Walker: “The challenge with November internationals is it would have a huge impact on the All-Ireland league structure. I would see it as a greater priority that the club game gets a greater depth of players so if an autumn series does come in we take the players out and the club game keeps going.”

The same question was put to Ireland’s outgoing coach. Doyle: “The IRFU need to think about that really seriously. It is the only way we are going to get experience into the squad. We can’t keep going on with just five games in the Six Nations. It is not fair to the girls considering how much work they are putting into it.”

It is looking increasingly unlikely that Ireland will qualify for the Rio Olympics in 2016. The IRFU are currently reviewing their Sevens programme. Will current Ireland players, like, say Jenny Murphy, be sought for the Sevens squad?

“That’s a conversation we can have in a few weeks time,” said Walker.

Walker mentions the “long-term player development pathway” specific for the women’s game, currently being hatched by Aboud and Nora Stapleton. “They are different to men’s . . . what we have learned is the progression is completely different but it also has a later point of entry into the sport, a bit later for women and from other sports.

“The big challenge is to progress our pathways further down. We are already having conversations with other nations about our under-20s.”

Doyle: “It is a must. We are the only Six Nations country without an under-20s side.”

Last week the IRB talked up Ireland hosting the next women’s World Cup in 2017. However, a report in yesterday’s Sunday Independent indicated the union had poured cold water on the idea.

“Documents haven’t been reviewed yet,” said Walker. “I don’t think there have been any conversations on it.”

Is a women’s World Cup in Limerick or Dublin still possible in 2017? “I’m not going to answer that question.”

1 Athletics Ireland agree to stage national championships
2 Ken Early: PSG would be sensible final move for Ronaldo
3 Manchester United huff and puff their way into semi-finals
4 Rory McIlroy: Maybe I’m just not as good as I used to be
5 There’s a bad moon rising but East Belfast GAC shine on
Real news has value SUBSCRIBE