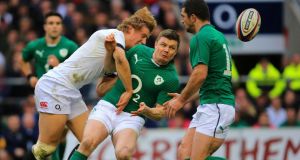 Ireland flanker Peter O’Mahony faces a battle to be fit in time to take on Italy in Dublin on Saturday week after suffering a hamstring strain in the 13-10 defeat to England at Twickenham.

The IRFU has confirmed the 24-year-old loose forward damaged a hamstring in the Six Nations third-round clash.

Brian O’Driscoll suffered cramp in his calf in the latter stages of the game.

The IRFU labelled the 35-year-old “very focused on his recovery” and he will be monitored by the medics throughout the week.

O’Driscoll should have no problems finding fitness for the Italy clash, provided he has sustained no damage to his calf other than the cramp that forced him off the field in the closing stages at Twickenham.

Ireland head coach Joe Schmidt paid tribute to O’Mahony for being “pretty generous with his body” in the wake of Saturday’s defeat.

The former Leinster coach will want the abrasive operator fit for Ireland’s Six Nations run-in, especially with the title still on the line.

“There are only so many seconds you can stay on the ball and be hammered away at without it taking its toll, and I thought he held on for two or three seconds at a time,” said Schmidt of O’Mahony’s bravery at the breakdown.

“If you don’t get the reward there are certainly a few bruises to show for it.”

Ireland’s match-day squad will meet on Wednesday for a two-day training camp in Belfast.